This month’s Atlantic Monthly has a two page piece, “The Last Stand of Ricardo Sanchez” about General Ricardo Sanchez, the first commander of US forces during the now 8 year old Bush war, Iraqi Freedom. This reports on Sanchez’s quest to bering the Bush regime to some accountability for their war. Definitely worth a read. 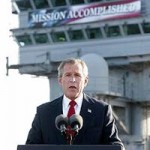 The return of George Bush to the national scene with the release of his memoir, Decision Points, once again roused feelings of anger and despair. Anger that we have such a weak sense of ethics, basic right and wrong stuff, in our culture. This man and his cohorts lied, aggressively distorted facts, and mislead the country into what has turned out to be a disastrous adventure in aggression in Iraq. If we had any real politics in this country at least some national politicians should have been calling for his impeachment and, perhaps,  trial for war crimes. The man is responsible for the devastation of Iraq, ten of thousands, at a minimum, civilian causalities, the flight of millions from their country to neighboring states, and the vast expansion of anti-US militancy around the world. This not to mention the costs directly to us in dead, wounded and financial costs running off into the far future. That is the source of my despair that Americans continue to be oblivious of the true cost to others and to themselves of our empire. In large part this ignorance is due to decades of propaganda from the government, industry and academies. Seemingly everyone in the elite is on the payroll of the empire.

The executive-congressional-military-industrial complex is real and effective. This renders us without any politics to grapple with this state of affairs.

The elite rolled out the big guns to puff Bush’s book. Heavy weight interviews with Matt Lauer and Oprah replete with a dust up with some silly rapper named Kanye West. This is what Bush faced instead of people who might have been capable of posing some serious questions with some serious follow ups. But, what exactly am I expecting. We are the people to whom politicians lie, reflexively and without any fear of repercussions. This has been going on continuously for my whole life. Bush is just the cherry on the ice cream float.

April 21, 2013 empire Comments Off on John le Carré on Bush’s Iraq War – The United States of America Has Gone Mad
John le Carré, author of many beloved spy novels, e.g., Tinker Tailor, Soldier, Spy, wrote this piece critiquing the then upcoming War on Iraq in January 2003. Besides pointing out the very strong connections between big oil and the Bushes, many other elements of the critique continue to be applicable --->> read more -->>

Recently Noted – about the American Empire

July 28, 2017 empire, recently noted Comments Off on Recently Noted – about the American Empire
A report about an amendment to the defense budget that would end the 2001 AUMF (Authorization for the Use of Military Force) that has provided legal cover for more than forty military actions around the world without Congressional oversight, just the decisions of three Presidents. Russia-Obsessed Media Ignores Barbara Lee’s --->> read more -->>