In his letter firing James Comey, now former Director of the FBI, Trump once again displayed the completely self-centered world that he inhabits. The second paragraph in this thankfully short letter reads:

While I greatly appreciate you informing me, on three separate occasions, that I am not under investigation, I nevertheless concur with the judgment of the Department of Justice that you are not able to effectively lead the Bureau. 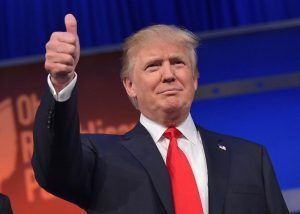 Meanwhile just last week Comey told a Congressional committee that in fact the FBI is investigating Trump’s campaign for possible connections to Russian hackers and social media thugs. But, for Trump, that has nothing to do with him. In his letter firing Comey Trump feels compelled to point out that he is not being investigated. Three times repeated even. The obvious conclusion that he wants drawn is that he is off the hook no matter what deeds were done by his staff to get him elected.

Sounds like Nixon in 1973. Others have drawn the obvious and valid connections to Nixon’s firing his Attorney General, Deputy Attorney General and then the Special Prosecutor (an incident known as the Saturday Night Massacre) in his defiance over a subpoena  to release tapes of his conversations. Later, these conversations, minus the Rose Mary Woods deletions, [1]See here for the Rose Mary Stretch towards the bottom of the entry. demonstrated that he had been at the center of the whole campaign to disrupt the Democrat’s election campaign.

In the midst of the Watergate debacle Nixon said:

When the dust settled a year later Nixon resigned rather than face impeachment.  A number of Nixon’s aides, his Attorney General and others were forced out of their positions, some did jail time, because of the crimes they committed to keep Nixon in the White House.

June 6, 2015 politics Comments Off on Hillary Clinton, Big Money, and Corruption
The trail of money around Hillary and Bill Clinton and their foundation continues to attract lots of comment and not a few efforts to prove that money changed hands in return for specific acts by Hilary as Secretary of State. Peter Schweizer’s book Clinton Cash: The Untold Story of How and --->> read more -->>

May 10, 2017 politics Comments Off on Trump – understanding the pathology
The strangeness that is Trump seems an endless topic of conversation. Several months ago I wondered about early signs of dementia in “Is Trump Showing Signs of Ageing?” Ongoing I have wondered about his weird speech patterns. Over the last day I have come on three sources that shed further --->> read more -->>

June 12, 2017 political system, politics Comments Off on Trump’s Innovations in Governing – the cabinet meeting
Just when you might be thinking that Trump should be paying attention to the burgeoning scandals and corruption that surround him; perhaps today he might be thinking about his next Twitter storm; how he might respond to the forthcoming lawsuits from folks in DC and Maryland claiming that he is --->> read more -->>