It will be no surprise to regular readers of AmericanDelusions that we are skeptical of markets and even more so claims made for markets. So, it was a pleasure to read the recent op-ed piece by Esther Duflo and Abhijit Banerjee, winners of the 2019 Nobel Prize in Economics, “Economic Incentives Don’t Always Do What We Want Them To: on their own, markets can’t deliver outcomes that are just, acceptable — or even efficient.” in the 10/26/2019 NYTimes.

Lets examine a few of the major points made in their piece.

”…a fundamental premise of economics has been that financial incentives are the primary driver of human behavior. Over the last few decades, this faith in the power of economic incentives led policymakers in the United States and elsewhere to focus, often with the best of intentions, on a narrow range of “incentive-compatible” policies.

This is unfortunate, because economists have somehow managed to hide in plain sight an enormously consequential finding from their research: Financial incentives are nowhere near as powerful as they are usually assumed to be.”

Duflo and Banerjee go on to provide examples from rich people, middle class and poor that show that people act in ways that directly contradict the behavior the financial incentives (utility maximization) would claim. They focus on the Alaska Permanent Fund that has passed out roughly $5,000 per year to every household in the state since 1982. The charts demonstrate that this did not lead to people laying about, rather they worked just as much or more compared to people living in similar states. 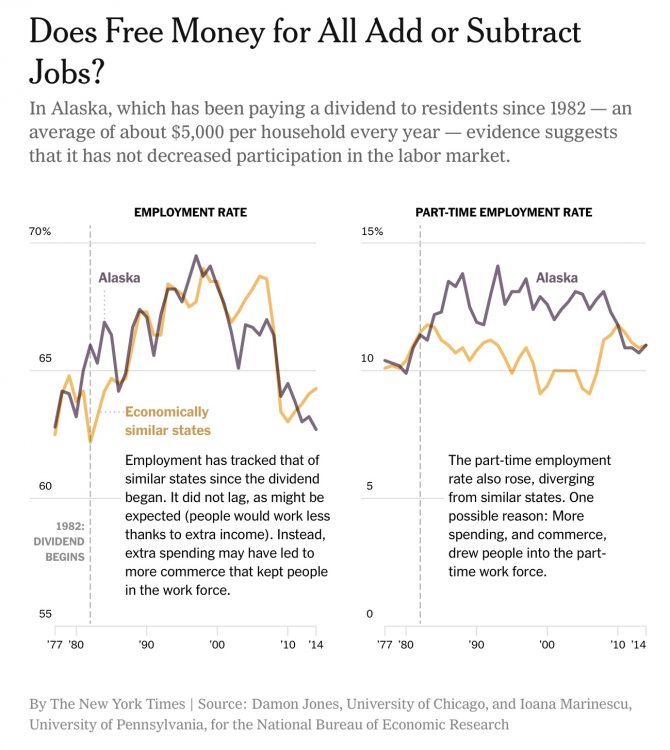 Faith in financial incentives is widely held in the general population. Duflo and Banerjee explore research done on 10,000 Americans. The disconnect between how they viewed others behavior vs their own is startling. Just to take one question as an example: “…60 percent thought that Medicaid beneficiaries are discouraged from working by the lack of a work requirement.” When describing their own behavior: “13 percent of respondents said they would probably work less if they received Medicaid without a work requirement…”

From another study the following chart demonstrates again how embedded the concept of financial incentives is in the population. 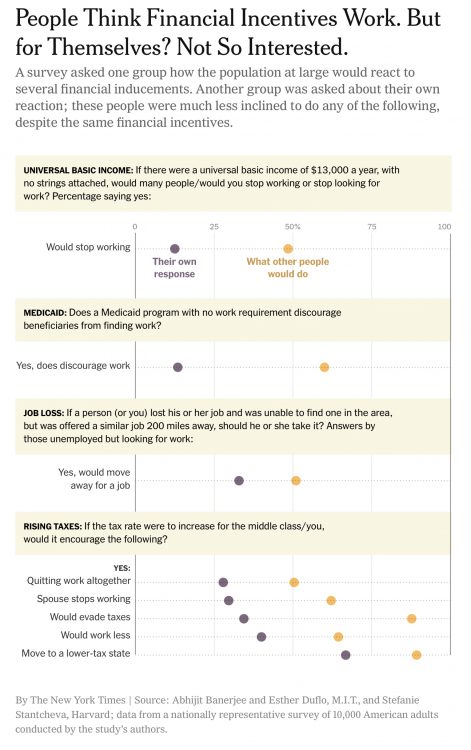 Duberflo and Bannerjee state: “The trouble is that so much of America’s social policy has been shaped by three principles that ignore these facts; to fix it we need to start from there.” First, there is the widespread claim that markets are self-correcting and efficient. “In the fantasy world where most economic policy conversations about trade shocks and technological innovations take place, people quickly adjust to those changes — workers move smoothly from making clothes in North Carolina to folding clothes in New York or selling clothes online.” Second, is the rhetoric, widespread throughout the Republican and Democratic parties, about dependency and welfare cultures. Third, raising taxes disrupts the economy and penalize the job creators.

Duberflo and Bannerjee provide several suggestions for more rational and effective social policies. But those are a topic for another discussion.

From the perspective of AmericanDelusions we are glad to see more evidence that main stream economists are finally abandoning the thinking that has made economics such a swamp of idealized thinking.

Here are some other posts that speak to the limits of markets: