A recent PBS Newshour report by Paul Solman on Thursday 3/15/12 in his series “Making Sense of Financial News” gave pause concerning the role of high frequency traders (HFT) on Wall St. (and doubtless on other markets around the world). First, you might ask what are HFTs? These are traders who use computer-based algorithms to select, buy, and sell shares on the markets. The speed of these transactions and the “thinking” that is performed is driving the HFTs to locate in lower Manhattan as close as possible to the main Internet port in the city. The few microseconds saved by not being a half mile away on Wall St. turns out to have great significance to HFTs.

The existence of HFTs first came to public notice when the great “flash crash” took place. On May 6, 2010 at 2:42 pm the Dow Jones industrial average, already down by 300 points that day, suddently lost more than 600 poijts in 5 minutes. 20 minutes later the market had regained the 600 point loss. Investigations pointed to the role of HFTs in these events. Since then there has been a lot of discussion of the stability of financial markets and the potential role of HFTs.

The Solman report noted that HFTs represent 2% of all the firms trading on Wall St., but conduct over 75% of the transactions. So, when you here that volume of the Big Board today was 3.56 billion shares (3/26/12) 2.67 billion were traded by HFTS. Solman also noted that the average time a share is held is 22 seconds.

What seems strange is that the question of the function and utility of HFTs is never examined beyond economists trotting out the well worn explanation that they are providing liquidiity to the market. By liquidity they mean the presence of buyers and sellers in the marketplace when someone wants to make a transaction. But is this a serious claim in favor of HFTs? Does this incredible display of computing power really mean anything more than people gambling on a fractional move within a few seconds? 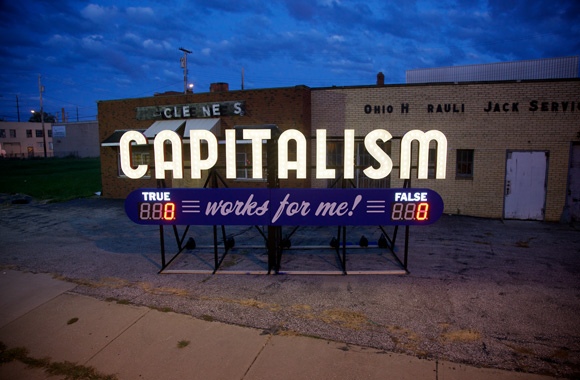 Now an aside. In a video presentation [1]I saw this at the the de Cordova Sculpture Garden and Museum in Lincoln MA by Steve Lambert about his work, “Capitalism Works For Me! True/False” he notes that people seem perfectly at ease thinking about global warming and the need to undertake massive changes in the fundamental underpinnings of our world, but when it comes to our economy we engage in endless euphemisms and obfuscations. From his website he says:

“For 50 years it has been unacceptable, politically, in the United States to ask what is basically a straightforward question. We have a particular economic system, it’s called capitalism. We have every right as a society to ask of that system, is it working? Is it working for us? Do the benefits and the costs balance themselves out in a way that says, do we want to keep this system? Or that says, we want to change this system? Or that says, we ought to look at an alternative system. We’ve been afraid to ask that question. We’ve been afraid to have public debates—that’s the legacy of the cold war. We can’t afford anymore to not do that. We have to raise the question.”

To turn back to HFTs, why do we need this kind of transaction? How do they contribute to economic growth? These activities are by definition a zero sum game. They are like every other form of gambling a zero sum game. There are winners and losers, but no incremental gain for the economy. Other than enriching the HFTs at cost to others with smaller computers and fewer PhDs on staff what do we get for allowing these activities? Potentially catastrophic destabilization of financial markets? Where is the upside for society as a whole? Isn’t  a primary purpose of any economy to increase the size of the pie, not just to redistribute existing wealth?

June 6, 2010 free-market ideology Comments Off on Free Markets – free? markets? – lessons not learned
“Free market” has always struck me as a rather strange phrase. Never more so than in this period of financial market disasters. The phrase ‘free market’ continues to be used reflexively. Just as commentators go right on speaking of Wall St. as a source of capital and innovation, few want to ask --->> read more -->>

Do We Need Wall St. and all the other gamblers in the financial services world?

April 20, 2010 economy, free-market ideology, politics 2
What Is the Function of Wall St.? The global financial meltdown of 2008 – 2009 with its ongoing sequelae seems not to have definitively demonstrated the dangers of our continuing belief in the religion of “free markets” nor shaken, especially it seems in the Obama administration, our thrall with Wall --->> read more -->>

Wall St – not about investing but fixing the game

July 9, 2013 economy, free-market ideology Comments Off on Wall St – not about investing but fixing the game
An article in the NY TImes today reports that NY Attorney General Schneiderman is pursuing various information providers, Thomson Reuters in the immediate case, for their practices of selling market sensitive information preferntially. Those paying a premium get information several minutes before its release to the general public. This is --->> read more -->>