The rhetoric about our health care system continues to center around market religions of one sort or another. For all of the blathering about “Obamacare” taking us over the edge into the territory of socialized medicine, it remains, like it’s progenitor dreamed up by Romney while governor of Massachusetts, a market focused policy. Even now Massachusetts is struggling to come up with policies to restrain the growth of costs to the rate of inflation plus 1%. At the national level it will be years before Obamacare can begin such considerations in real terms.

What is missing is a willingness by the political system to engage the undeniable truths about our health care system. 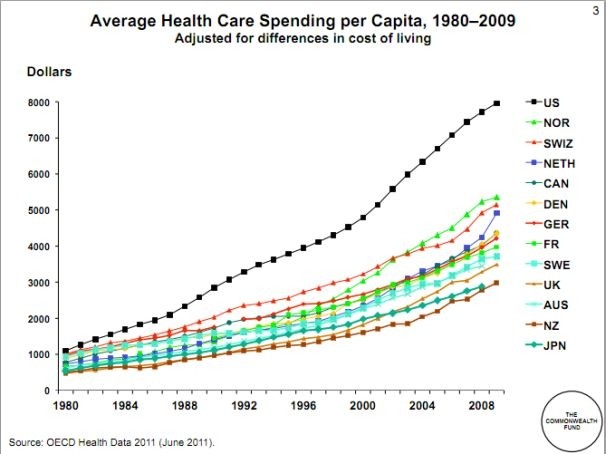 To give some context to what it means to be number 1 in health care spending it is important to know that, for example, “Combined public and private spending on health care in the U.S. came to $8,233 per person in 2010, more than twice as much as relatively rich European countries such as France, Sweden and Britain that provide universal health care.”  [2]New York Times VIEW FROM EUROPE JUNE 28, 2012, U.S. Health Care Costs More Than ‘Socialized’ European Medicine By HARVEY MORRIS

If we ranked number 1 on all of the important performance indicators perhaps we could argue that we are getting something for our expenditures. But in reality our health outcomes are hardly better than countries like Chile or Ecuador which spend a third as much per capita.

How Do We Spend Much Less and Produce Significantly Better Results?

So, the real debate we need to have is how do we radically change our health system to spend much less money and achieve the results other countries have consistently proven can be expected.

The frustrating aspect to our health care debacle is that unlike many other problems facing us, long term unemployment, poor educational outcomes, for example, we can look around the world and see many health care systems in the developed world that already perform significantly better than ours while spending significantly less. We could almost throw a dart at a map of the developed world and know that we will find a solution already demonstrably working.

Unfortunately we find ourselves in the ugly situation of a political system that is unable to even begin a discussion of transforming our health system because it is in the thrall of all of the money flowing in from doctors, hospitals, drug companies, medical device companies, and insurance companies.

There is no solution to this situation in view. In fact it is easy to believe that we are sliding backwards. Nevertheless, an important step is to reframe the discussion in our own minds and insist in conversation with others that they challenge the current frames so insistently repeated in the media.

December 3, 2018 healthcare Comments Off on Medicare for All – Cheaper and Better
“We therefore estimate that Medicare for All could reduce U.S. Health Consumption Expenditures by about 9.6 percent while also providing decent health care coverage for all U.S. residents” The Medicare for All movement gained some new support from a study released last week. The research report, “Economic Analysis of Medicare --->> read more -->>