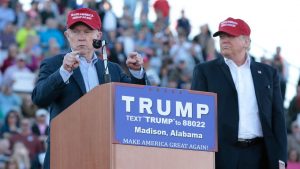 Attorney General Sessions clearly knows no history, even that of his own lifetime. He is just another petty, cyclical political hack thrust into a prominent position.

The Nixon campaign in 1968, and the Nixon White House after that, had two enemies: the antiwar left and black people. You understand what I’m saying? We knew we couldn’t make it illegal to be either against the war or black, but by getting the public to associate the hippies with marijuana and blacks with heroin, and then criminalizing both heavily, we could disrupt those communities. We could arrest their leaders, raid their homes, break up their meetings, and vilify them night after night on the evening news. Did we know we were lying about the drugs? Of course we did.” [1]https://harpers.org/archive/2016/04/legalize-it-all/ accssed 5/13/2017

So, more than 45 years ago began America’s longest war. Over this period these policies have locked up a very large number of people effectively ruining their lives because this war also brought on repressive laws and policies that make it very difficult for people released from jail to get a job and restart their lives. And, these policies have done nothing to decrease drug usage in the US. In fact we have seen the internationalization of these failed policies with agents from the Drug Enforcement Agency roaming about in pursuit of drug kingpins. One might also note that despite more than ten years of US armed intervention in Afghanistan, more than a 100,000 deaths, and between 1 and 2 trillion dollars spent [2]The Financial Legacy of Iraq and Afghanistan: How Wartime Spending Decisions Will Constrain Future National Security Budgets by Linda Bilmes – https://research.hks.harvard.edu/publications/workingpapers/citation.aspx?PubId=8956&type=WPN accessed 5/13/2017 Afghanistan remains a narco state.

So Jeff Sessions, tough guy, is going to reverse the very modest corrective direction of Obama’s policies to once again refill our jails. More vicious mindless policy making from the Trump regime.

November 6, 2020 human nature, political system, politics Comments Off on The Crisis of The American Political System
Friday November 6, 2020 – Election Results Still in the Waiting Room As I wait for the electoral machinery to complete its work I am struck by how this election has confirmed that we are in a deep mess with nothing in sight to set us on a more productive --->> read more -->>

9/11 and the Trump Pandemic – a contrast in reactions

December 5, 2020 empire, politics, security state Comments Off on 9/11 and the Trump Pandemic – a contrast in reactions
Since I noticed that every day now as many Americans are dying in the Trump Pandemic as died during the 9/11 attacks I have thought about how different public and government reactions have been. 9/11 2,977 people died in the attacks in the US on 9/11/2001. 9/11 brought on a --->> read more -->>