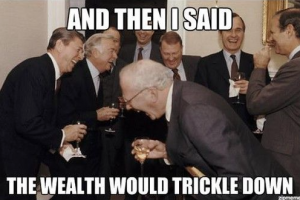 When I posted this back in June 2017, I was hardly prescient, just sure that Republicans and conservative Democrats would return to the illusory language of trickle-down economic growth. Yesterday President Trump kicked off his big tax cut program in Indiana saying, “a revolutionary change, and the biggest winners will be the every day American workers as jobs start pouring into our country, as companies start competing for American labor, and as wages continue to grow.”

Get ready for more trickle-down nonsense.

As the rest of us are recovering from the outrageous Senate healthcare bill released this week, Trump and the Republican Party are having closed door meetings to shape their “reforms” to the Federal tax system. Get ready for a resurgence of rhetoric about how enriching the rich will generate a surge in economic activity that will raise all boats. There will be lots of talk about “pro-growth tax reforms”. This is the return of 1980s trickle-down economics. The basic notion is that if you put more money in the pockets of the rich and corporations they will invest in creating new businesses and jobs. Thus the money trickles down to the bottom. Trump and his Republican Party allies have already claimed that this will increase the growth rate of the economy from its recent typical of 1.5% to 2% annual growth to over 3%. The difference of this one percent has enormous implications. At 2% growth the economy doubles in 36 years. At 3% growth it doubles in only 24 years.1 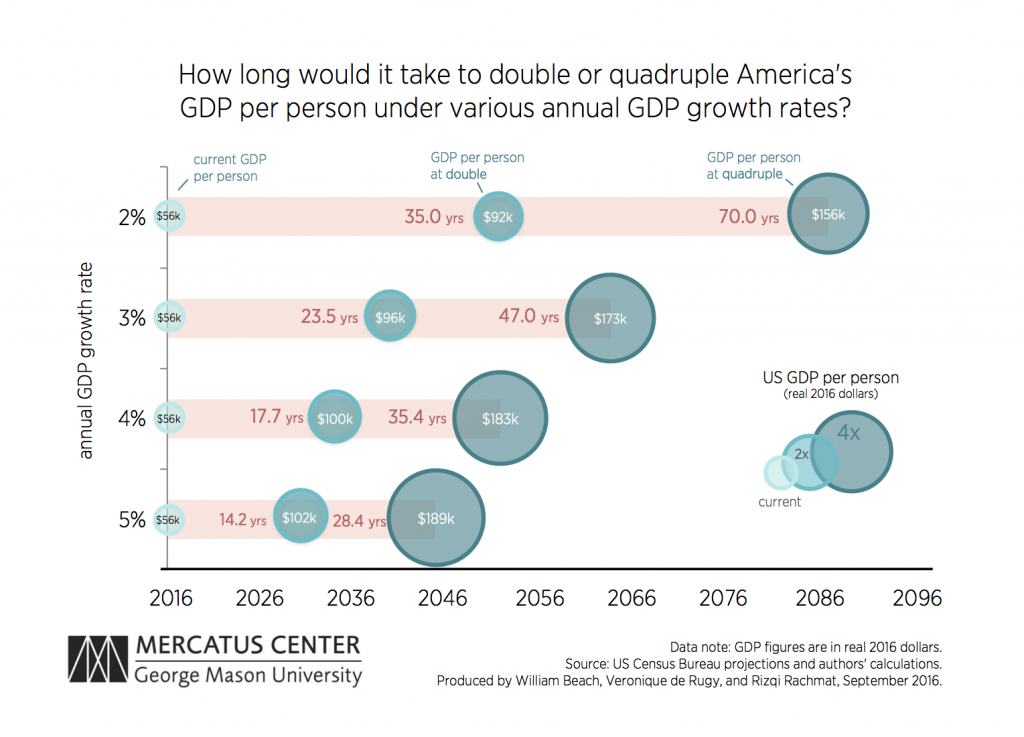 BUT, no economist, banker, or corporate chieftain not on the payroll of Trump and the Republicans believes this will happen. Leaving aside all sorts of analysis about demographics (aging population), technology, and global competition, history and current events provides a fairly comprehensive rebuke to these trickle down cover stories for the Republican give backs to the rich and corporations. Trickle-down economics was invented in the early 1980’s to explain the wisdom of Ronald Reagan’s tax “reforms”. Much space was taken up with displays of Prof. Arthur Laffer’s demand curves that were passed off as proof from the academy that enriching the rich and corporations would unleash a new wave of economic activity. Nothing like that happened in the 1980s. Nothing like that happened in the first decade of this century after Bush II’s big tax cuts. 2 And most recently in Kansas, the Republican dominated State legislature had to override the governor’s veto of tax increases after a 5 year experiment there with trickle-down drove the state nearly to bankruptcy. 3

Nevertheless, get ready for another round of bull shit Republican propaganda about “pro-growth tax policies”, unleashing the over-regulated, over-taxed job creators, and a great surge in economic growth. The forces of free-market capitalism just need to be freed from the shackles of government. You will here all of this and more. The media will continue to do its job of repeating all of this. You need to be clear that the vicious Republican Party is at work for their masters among the rich and corporations. There job is making sure that the 40 year stagnation in incomes for the 80% will not change course and the flood of wealth will continue to those at the top.

Trump Republican Policy Crimes (some only attempted at the moment)

November 30, 2017 political system, politics Comments Off on Trump Republican Policy Crimes (some only attempted at the moment)
Trump – Republican Positions and Crimes (some just attempted) against the poor, working and middle class Not to be obsessive, but the current Trump Republicans effort to cram their bill to pay back their corporate and rich supporters with giant tax breaks has me frothing a bit. I wrote down --->> read more -->>