Innovation is at the heart of capitalism

We have been constantly told this for so long that it is now an assumption that has become an accepted fact. On the other hand, government is slow-footed, clumsy, bureaucratic, rule bound and the antithesis of innovative. This is the flip side of the capitalism is innovative story. One famously turned into a much quoted phrase by President Reagan, “Government is not the solution to our problem, it is the problem.” 1 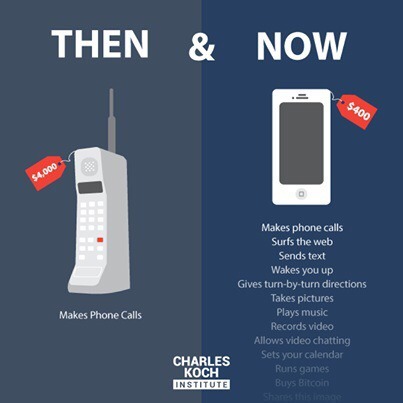 So, when you see this image  from the Charles Koch Institute you do not need to be too clever to know that this fits into this narrative. 2  Markets drive innovation. Technology becomes more powerful and prices fall as products reach the mass market.

What does government have to do with these technologies?

The first satellite based phone call was made in 1962 featuring VP Johnson and the Chairman of AT&T Fred Kappel. NASA, a government agency put the satellite up and AT&T provided other parts of the technology. From today’s perspective this might appear to be a joint project between government and private industry. That would be a mistake. The AT&T of that time was a government regulated national behemoth that held a monopoly on telecommunications. Thus it did not suffer the risk aversion that makes it impossible for capitalist corporations to invest in projects that will not turn a profit within a few years at the outside. 3

iPhone and the State

Apple is one of our cultural darlings. Noted and notorious for its creativity and sense of style. But all of the basic technologies that they first applied to develop the iPod and then the iPhone are the fruits of government-funded research. LCD screens, click wheels, multi-touch screens, the internet, GPS, Siri, and more….. 4see Mazzucato, Mariana. The Entrepreneurial State: Debunking Public vs. Private Sector Myths. Revised edition. New York, NY: PublicAffairs, 2015.[/notye]

For all of the chest beating about the bold risks taken by capitalists, the capitalist time horizon is very short when compared to the many years of work that have gone into almost every significant scientific and technological advance. Without extensive government investment in activities that deliver longer term success, the capitalist system will simply eat its seed corn until it is gone. This is so not just for scientific and technological development, but also for education, health, environment, and infrastructure. Capitalism is not structured to fund any of these necessary activities without government action to protect these areas of human endeavor.

July 14, 2017 free-market ideology, recently noted Comments Off on Recently Noted – about free market capitalism – is capitalism the real problem?
Capitalism is driven by a single internal logic that requires the transformation of people and nature into commodities to produce profits. This logic is amoral and the system, excepting for external controls by government and social institutions, just churns on. Despite the enormous increase in the economic output over the --->> read more -->>