Capitalism has always been marked by relentless growth, the destruction of smaller businesses by larger, and ultimately the creation of oligopoly and monopoly corporations. From the earliest descriptions of capitalism, even by proponents like Adam Smith, this tendency towards concentration was warned against. In the US this feature of capitalism has engendered repeated efforts by progressive political forces, representing working and middle classes and small business owners, to use government to create protections against the negative outcomes of oligopoly and monopoly. The excesses of the Gilded Age were curbed by anti-trust legislation of the turn of the 20th century. Politicians of both parties supported this legislation and conducted active enforcement. Famously John D. Rockefeller’s Standard Oil was broken up in 1911 after decades of predatory anti-competitive price fixing and market manipulations.

In the last fifty years the Federal government has significantly decreased it enforcement. This has been a central policy plank of free-market capitalist politicians. The resulting changes in law and policy have lead to a significant increase of concentration in every sector of the economy.

The new digital economy is now following the same path of concentration. This is of increased importance because the digital sector has become a large component of the overall economy. The big five, Apple, Amazon, Alphabet (Google), Facebook and Microsoft now represent more than $3.3 trillion in market capitalization. Their price growth in 2017 accounted for more than 25% of all S&P growth for the year.  And, of course, they are ever present in our day-to-day lives.

Google and Facebook are now approaching oligopoly status in their control over advertising spending. These two charts extracted from an article by Peter Kafka at Recode.net, “These two charts tell you everything you need to know about Google’s and Facebook’s domination of the ad business: Scary! (If you don’t work at Google or Facebook.)“ are illustrative: 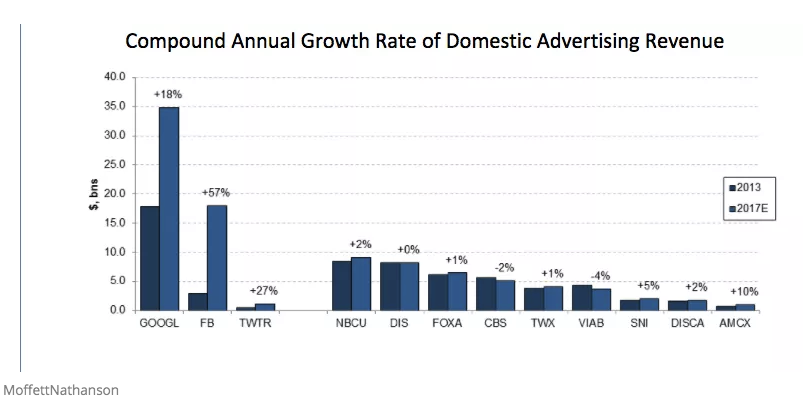 Nathanson notes: “You can see that the Facebook/Google duopoly ate the print guys’ lunch many years ago, and finally surpassed the TV guys last year. The good news for the TV guys is that their business has yet to collapse. Which is a pretty grim way to describe “good news.””

February 21, 2018 economy, free-market ideology, video-movies-podcasts Comments Off on John Oliver and Monopoly Capitalism
Corporate concentration of income and wealth are core features of capitalism. From its earliest chroniclers and cheerleaders like Adam Smith, the drive for corporations to get ever larger and in the doing drive their competitors out of the market was noted and warned against. In the US, the late 19th --->> read more -->>

October 25, 2020 free-market ideology, Video Posts Comments Off on Video Post – Externalities – getting somebody else to pay for my production costs – the In Depth Capitalism series
Capitalism features a structural drive to create and use external costs to increase profits. Pollution of the earth is the most obvious and visible; there are many others including injuries and death for workers.

April 3, 2019 family, inequality, justice/jails, racism, video-movies-podcasts Comments Off on Evicted – the book and the exhibition
We read Evicted – poverty and profit in the American city by Matthew Desmond last year in our local library book group. Recently on a visit to Washington DC to the National Building Museum (401 F St. NW – Judiciary Square Metro stop) we came on an exhibit based on --->> read more -->>