“There” is our current situation in which our government has been bought by the rich and corporations, over 80% of the population has not had a pay raise in 40 years and the public sphere, schools, parks, our infrastructure, really anything not behind the gated walls of private wealth, is being starved in the name of free market ideology. The American promise that hard work, pluck and a bit of luck can bring success to anyone, regardless of their rank at birth, is an empty myth. If you are born poor you will die poor. Even if you are middle-class, there is a significant chance that you will sink and at any rate you will always struggle just to keep that middle-class status.

The rich and corporations have waged a 40 year class war. At this point they have won all of the battles and continue to take home the spoils.

“Park Avenue: Money, Power & The American Dream” – a 2012 Independent Lens documentary will take you a long way to understanding how this happened. 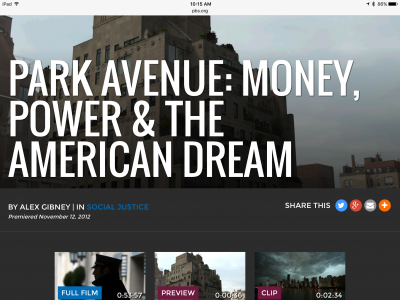 Park Avenue puts faces to many of the wealthy and the corporations. Do not for a moment think that if we could just rid ourselves of these avaricious individuals that our problems would be solved. Underlying their behavior are the ineluctable dynamics of capitalism. Despite the anti-government rhetoric of free market ideologues like Paul Ryan, the Koch brothers and their patron saint Ayn Rand, capitalism has from its very beginning been intimately tied to government power. It is through government power that the wealth and corporations multiply the natural tendency of capitalism to super-concentrate wealth. The free market rhetoric hides a persistent purchase and use of government power to change the rules of the game so that virtually every last dollar of growth ends up in the pockets of the wealthy and corporations.

Lacking a replacement for capitalism we need to build a political force strong enough to reach beyond today’s identity politics and focus on putting in place market rules that favor the poor and middle-class instead of today’s rules that so comprehensively rig the game.

BTW – the statistics on wealth and inequality cited in Park Avenue are from 2011 and earlier. In the ensuing 6 years all of them have gotten worse. In fact the concentration of wealth in the hands of the top tenth of one percent of the population has accelerated.

April 1, 2017 free-market ideology Comments Off on Thoughts on Standard Economics
I’ve been looking through Paul Krugman’s textbook Macroeconomics (Krugman and Wells, 4th edition, 2015) and came on Principle #2 – “The opportunity cost of an item—what you must give up in order to get it—is its true cost….The concept of opportunity cost is crucial to understanding individual choice because, in --->> read more -->>

August 20, 2018 environment, free-market ideology, political system Comments Off on Plastics and Run Amuck Capitalism
Plastic packaging is swamping the world with refuse that never degrades and flows into mountains of trash in land dumps and pollutes the oceans. For example, the bottled water industry produces over 50 billion bottles per year for the American market alone. Roughly 38 billion are not recycled and end --->> read more -->>