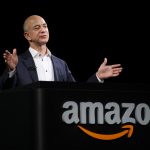 It is always useful to put a face to trends. The grotesque yawning extent of inequality is one of those trends that begs for the concrete. Knowing that a million seconds is 12 days while a billion seconds is 31 years gives some shape to the dimensions of inequality, it is still difficult to wrap one’s head around the scale of inequality that continues to surge.

Today this message from Bernie Sanders arrived in my email.

I want to ask you to clear your mind for a moment and count to 10.

In those 10 seconds, Jeff Bezos, the owner and founder of Amazon, made more money than the median employee of Amazon makes in an entire year. An entire year.

Think about how hard that family member has to work for an entire year, the days she or he goes into work sick, or has a sick child, or struggles to buy school supplies or Christmas presents, to make what one man makes in 10 seconds.

According to Time magazine, from January 1 through May 1 of this year, Jeff Bezos saw his wealth increase by $275 million every single day for a total increase in wealth of $33 billion in a four-month period.

Meanwhile, thousands of Amazon employees are forced to rely on food stamps, Medicaid and public housing because their wages are too low. And guess who pays for that? You do. Frankly, I don’t believe that ordinary Americans should be subsidizing the wealthiest person in the world because he pays his employees inadequate wages.

But it gets remarkably more ridiculous: Jeff Bezos has so much money that he says the only way he could possibly spend it all is on space travel.

Space travel. Have you ever heard of such a thing? It is absolutely absurd.

Well here is a radical idea: Instead of attempting to explore Mars or go to the moon, how about Jeff Bezos pays his workers a living wage? How about he improves the working conditions at Amazon warehouses across the country so people stop dying on the job? He can no doubt do that and have billions of dollars left over to spend on anything he wants.

So today, whether or not you use Amazon, I want to ask you to join me in sending a message to Jeff Bezos:

Sign my petition to Jeff Bezos: It is long past time you start to pay your workers a living wage and improve working conditions at Amazon warehouses all across the country. He needs to know that you are aware of his company’s greed, which seems to have no end.

Now, I have never understood how someone could have hundreds of billions of dollars and feel the desperate need for even more. I would think that, with the amount of money he has, Jeff Bezos might just be able to get by.

And I think there is something weird and wrong with people who have that much and are willing to step over working people, many with families and young children, in order to get more and more.

But this is not just about the greed of one man. These are policy failures as well.

Last year, Amazon made $5.6 billion in profits and did not pay one penny in federal income taxes. The Trump tax cuts rewarded Amazon with almost $1 billion more. And city after city is offering additional tax breaks, mostly in secret, for the right to host Amazon’s second corporate headquarters.

In my view, a nation cannot survive morally or economically when so few have so much and so many have so little. Millions of people across this country struggle to put bread on the table and are one paycheck away from economic devastation, and the wealthiest people in this country have never had it so good.

It has got to stop.

Sign my petition to Jeff Bezos: It is long past time you start to pay your workers a living wage and improve working conditions at Amazon warehouses all across the country. He needs to know that you are aware of his company’s greed, which seems to have no end.

As Americans, we must ask ourselves one fundamental question, and that is whether or not this is the kind of country and economic culture we are comfortable with.

I am not. And I don’t believe you are either.

Thank you for making your voice heard.

Since most of us don’t measure anything about our incomes or net worth in millions let alone billions here is a restatement of the earlier comparison between millions and billions:

BTW – Feel Free to Click on Bernie’s “Add Your Name” link above.

The Future of the Women’s March

January 24, 2017 politics Comments Off on The Future of the Women’s March
There is much ongoing discussion about steps needed to turn the enormous one day action of the global Women’s March in to a sustained movement to achieve better outcomes for the vast majority of Americans. To focus on just one strategic element, the movement needs to move beyond identity politics --->> read more -->>

June 26, 2019 economy, free-market ideology Comments Off on Recently Noted – Robert Reich on breaking up Big Tech – a limited view
Robert Reich is continuing his series of brief YouTube videos on progressive view of the economy. This is a good introduction to the arguments for re-invigorating our protections against monopolies. However, the problem is much more widespread than just the high tech industry. We’ve written about this broader phenomenon in --->> read more -->>