AmericanDelusions does not generally comment on the day-to-day political scene. But, the behavior of the Republican Party in recent years has become so toxic to our country that we pause to take note.

While attention is focused every day on the depressing narcissistic spectacle of the Trump White House one of the more amazing shows surrounding and enabling Trump is the complete moral collapse of the Republican Party. 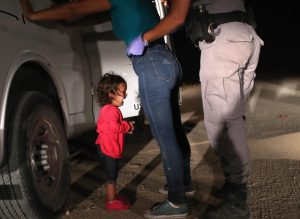 Trump’s border security troops rounded up families and separated babies, small children and teenagers from their parents. These were placed in tent cities cutoff from contact with their parents. This incredibly inhumane policy aroused no outcry from Republicans. Many offered up excuses or blamed the migrants.

While the Republicans controlled both the Congress and Senate for two years they could find little time to do much about many pressing problems or even  Trump’s center piece campaign promise of a big, beautiful wall. They did find time to pass a tax bill. “The final conference committee agreement of the Tax Cuts and Jobs Act (TCJA) would cost $1.46 trillion under conventional scoring and over $1 trillion on a dynamic basis over ten years, leading debt to rise to between 95 percent and 98 percent of Gross Domestic Product (GDP) by 2027 (compared to 91 percent under current law).1 The Republicans trotted out their usual claims that this would stimulate economic growth despite the fact that these claims have been proven wrong repeatedly over the past 40 years. The real purpose of this bill is twofold. 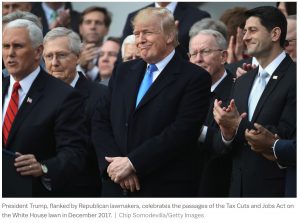 First, provide their wealthy individual and corporate donors with a pay day of $ trillions in tax breaks further aggravating the already grievous state of income and wealth inequality in the US. Second, by driving up the Federal debt they are creating an excuse to attack social security, Medicare, and other programs that support the middle class and poor. The cynicism of these policies is truly staggering.

The Republican Party has been carrying out a voter suppression campaign all across the country. They explain that they are really the responsible party in driving down voter fraud. This despite the fact that there is no evidence of voter fraud amounting to more than the proverbial hill of beans anywhere in the country. The objective is painfully obvious.

During 2017 and 2018 while controlling both houses of Congress the Republicans voted over 50 times in the House to repeal Obamacare. Doing this would of course throw millions of Americans back into no health insurance hell, but not once did the Republicans bring to either house a bill to replace and improve on Obamacare.2

This list of Republican failings could go on. But, to the most recent. Trump declared a national emergency over his campaign promise of a wall on the southern border. Yet even in doing so he stated that it really isn’t an emergency after all, “I could do the wall over a longer period of time, I didn’t need to do this, but I’d rather do it much faster.”3 Almost no Republican took up the challenge to Article 1 of the Constitution that clearly places responsibility and authority for deciding where to spend money in the Congress. Presidents don’t hold the purse strings. Almost no Republican challenged Trump’s assertion that the situation is in fact an emergency in the sense taken by all previous declarations.4

Finally there is the almost thunderous silence about the qualities of the man in the White House. He is demonstrably and obviously an amoral narcissist who lies reflexively, chaotically, compulsively, without end. He is so egregious as to state that Presidents preceding him had wanted to build a border wall even with four living presidents explicitly repudiating him. He is notorious in the business community for bullying partners, vendors, contractors,m really anyone working for him then failing to pay them. His bankruptcies are legion. He even lies about how many stories there are in his various towers. His attitudes towards women alone deserve condemnation. He is a person almost free of any facts about the world and its history. The only fact that really matters to Trump is how many people applaud him regardless of the reason. This is the man that Republicans support with vigor, even enthusiasm.

Vicious Republicans Not Trump Are The Problem

June 22, 2017 politics Comments Off on Vicious Republicans Not Trump Are The Problem
With today’s release of the Senate’s version of the Republican healthcare bill we see clearly that the Republican Party is a vicious, immoral pack of angry white people – mostly men it would appear from the faces representing the party in the media (see below). No matter how you slice --->> read more -->>

June 30, 2020 healthcare, political system, politics Comments Off on The Trumplican Pandemic
It is absolutely clear that Trump and Republicans (Trumplicans) are to blame for the state we find ourselves in. Trump and Republicans can talk all they want about “Wuhan virus” and other racist slurs. There is no other explanation for the tremendous surge in COVID-19 cases across the southern belt --->> read more -->>