Having successfully avoided much of the national moment for our politicians to blather on about the true meaning of 9/11, I was struck this morning by parallel between our “War on Terror” and our longest war, the “War on Drugs” (I have written earlier about this here). Some may be offended initially by this comparison. The War on Drugs was invented for the most cynical of purposes by one of our more craven Presidents, President Nixon [1]I used to refer to him as our most craven, but Bush Junior has caused some reconsideration of this point. But, when one observes the gigantic interests in Federal, State, and local bureaucracies (think your local police) and corporate worlds that immediately lined up to feed at this trough of a war, a bit of cynicism can not help but creep into mind.

Nixon’s invention spawned a plethora of Federal, State, and local bureaucracies consuming vast resources and spreading around the globe. Meanwhile, our social and criminal policies gauranteed high prices for the drug lords thus supporting a marketing and distribution system that provides service levels 24/7/365 to make Fedex give up. No other commodity is available in every location in the US with such reliable service packaged to meet local demand and local financing needs. On top of that, Nixon’s war, supported continuously since then by every President, the Congress, the court system, State governments and of course your local police departments, put millions of drug users in jail. This of course has swollen the ranks of those cursed with a criminal record and increasingly unemployable. Finally, no one is willing to discuss the outcomes of our drug policies. No one will vote to shrink or eliminate this war, America’s longest war. The policies continue to suck up resources, destroy other countries, and gravely damage millions of our own citizens. 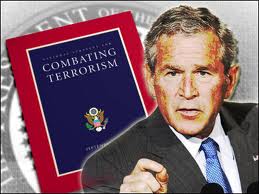 As reported by Admiral (Ret.) Dennis Blair, former Director of National Intelligence, earlier this summer at the Aspen Security Forum, we are now spending $80 billion per year , not including our War on Terror wars in Iraq and Afghanistan (these would add hundreds of $ billions to this) on the War on Terror. He went on to report that a generous estimate of the world-wide strength of al-Qaeda and its affiliates is 4,000 men. This means that we are spending $20 million per year per potential terrorist. Others have reported on the continuing growth by tens of thousands per year of employees in our burgeoning public and private security apparatus. Meanwhile we have numerous agencies spying on Americans in the name of “national security”. It seems enormously likely that emails are regularly being subject to capture and it is hard to imagine that cell phone conversations, transmitted in the open (as are emails), are not also subject to surveillance. Where has the Fourth Amendment gone? To top it all off, do you feel more secure when you take your shoes off to enter an airplane? Do you think that our current anti-terrorist policies will be any more successful than the first ten years? Do you think that anyone will speak and act to end this second longest war?

April 15, 2013 justice/jails, politics Comments Off on Our Longest War – The War on Drugs – more data on its futility
I have noted here several times earlier about America’s longest war – the War on Drugs. Here is a graphic that displays the complete failure of our policies: