Today I received an email from Congressman Faso’s campaign committee. It read in part: 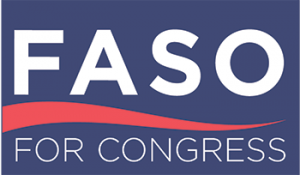 The Democratic Congressional Campaign Committee (DCCC) today released a memo claiming Democrats are “starting the 2018 election cycle on offense.” This is an alarming statement on many levels. For one, they really do see the future of our nation as nothing more than a political game. They are also choosing to completely ignore the American people by not acknowledging the sweeping Republican victories from just two months ago.

The most worrisome item in the memo is that the DCCC listed my seat as a “Round One Target.” I was sworn in less than a month ago and already the Washington Establishment is targeting my district as one to pour hundreds of thousands of dollars into in order to install the liberal candidate of their choice.

The email then went on asking me to donate to his re-election campaign!

Here is my reply:

Though I can understand your desire for re-election, what have you actually done? Why do you expect voters to contribute to a campaign that is two years away when so far you have delivered no results? You have not even put proposals for key issues on your website so that we can see what and who we are supporting.
What are your proposals to improve the healthcare system?
More specifically what are your proposals to make our healthcare universal, cost effective and top quality?
In 2011 the United States was number 1 in terms of health care spending per capita but ranked 39th for infant mortality, 43rd for adult female mortality, 42nd for adult male mortality, and 36th for life expectancy. Our competitors for healthcare outcomes are amongst the poorer countries in the world. While our developed country cohort features some of the best health outcomes.
Our number 1 position in spending is not some neck and neck affair crossing the finish line. In 2011 the US spent $8,508 per capita on healthcare.   The UK spent $3,405 per capita, Canada $4,522, the Swiss spent $5,643. They are the next highest to us at 66% of our spending. This enormous gap in spending is not a recent phenomenon. The gap has been widening for decades.

Repealing Obamacare is not the issue. Everywhere in the developed world the standard for healthcare is universal access with world class results at an affordable cost. Each of these countries has somewhat different approaches. All of them have worked for decades. There must be some good solutions that we could adapt to our situation. That is your challenge Mr. Faso.

The Moral Bankruptcy of the Republican Party

February 19, 2019 politics Comments Off on The Moral Bankruptcy of the Republican Party
AmericanDelusions does not generally comment on the day-to-day political scene. But, the behavior of the Republican Party in recent years has become so toxic to our country that we pause to take note. While attention is focused every day on the depressing narcissistic spectacle of the Trump White House one --->> read more -->>

December 3, 2018 healthcare Comments Off on Medicare for All – Cheaper and Better
“We therefore estimate that Medicare for All could reduce U.S. Health Consumption Expenditures by about 9.6 percent while also providing decent health care coverage for all U.S. residents” The Medicare for All movement gained some new support from a study released last week. The research report, “Economic Analysis of Medicare --->> read more -->>