Dollars and Sense has been around since the 1970s. Always a source of well researched critiques of capitalism. I recently, after a more than 30 year hiatus, re-upped a subscription. 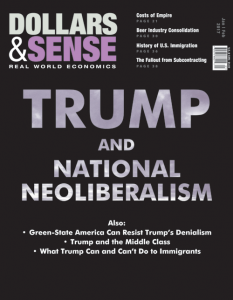 Your new issue showed up the other day with the word “neoliberalism” in bold type on the cover. The continuing use of this term is not helpful. When I first saw this word a few years ago I wondered how the word “liberal” and “neoliberal” are connected? Then, I remembered the little I can recall about 19th century European political philosophy. Oh, its that liberalism that is new!

Really, outside of academic circles no one knows what this word means. Most in my circle find it off-putting, obscure and boring.

I prefer to refer to this ideology as “free market religion”. “Free market” is a widely used term as in “free market capitalism”.  And “religion” gets across the fact that this is a counter-factual pile of BS.

If you don’t like my term, come up with something better. Please stop using “neoliberalism”.

A Reply from D&S

in response to Mark Orton:

Mark, this is something that we struggle with, but we have over the years decided that it is more important to call our current economic system by the name that left economists have tended to use. You’re right that its origins are academic, but other mainstream publications have been using it more and more (for example, The Guardian, Salon, Jacobin, and (as far back as 1990) The American Prospect.

Dollars & Sense authors have been using (and carefully defining) the term “neoliberalism” for years now (most recently in David Kotz’s two-part piece on the crisis of neoliberalism (here, but for years before that). We do try to explain the term whenever we use it.

Sasha Breger Bush’s cover story makes a careful argument that Trump’s economic policies do not signal an end to the free-market, anti-government policies of the neoliberal era, but do signal the end to its globalist orientation. She’s proposing that if he gets his way we will be entering a different economic regime, and she gives it the name “national neoliberalism.” It’s a bold and thought-provoking analysis and we wanted to use her new term on the cover. We recognize that downsides, but we think our readers are familiar enough with the term and those who aren’t will read on to see what it means.

You suggest calling neoliberalism “free-market religion” (which reminds me of Bill Black’s term “theoclassical economics”–see for example here). I think that works when “neoliberalism” refers to free-market ideology. But “neoliberalism” also refers to an economic system that results after years of policy justified by free-market ideology. You’re right that the ideology is BS, and the economic set-up that results from years of “free-market” ideology is not really characterized by “free-markets” (as Breger Bush show’s, it’s just as much about corporate capture of government to promote ruling-class interests at the expense of everyone else). But the system itself is not BS and it deserves a non-pejorative name. The name that left economists have come up for it is “neoliberalism.”

Anyhow, you are surely right that it is offputting to some people, and that’s why we’ve struggled with whether to use the term. But we think the value of getting people familiar with the name of the economic system we’ve been living under outweighs the downsides of using the term. Your comment is a reminder that we need to do better about explaining what we (and left economists) mean by the term.

This is of course an interesting addition to my knowledge of the thinking at D&S about the language they employ. But, even this discussion further supports my conviction that we need to develop a more robust accessible language to use in public discourse about one of the most important issues of our time. I am quite certain that the readership of D&S is not confused or put off by the term “neoliberalism”.

The audience of my concern is the average American who has been subjected to a sustained campaign of free-market thinking from the Republicans, most Democrats, the mass media, corporations, the academy…..not to mention Wall St. for the past 40 years. If we want to offer an alternative analysis we need direct language that does not refer to thinking and issues from 150 years ago. Language that invites immediate suspicions that those speaking are academics and intellectuals who by definition are not connected to the day-to-day realities of American life.

July 5, 2017 free-market ideology Comments Off on Capitalism and Innovation
Innovation is at the heart of capitalism We have been constantly told this for so long that it is now an assumption that has become an accepted fact. On the other hand, government is slow-footed, clumsy, bureaucratic, rule bound and the antithesis of innovative. This is the flip side of --->> read more -->>

Trump Republican Policy Crimes (some only attempted at the moment)

November 30, 2017 political system, politics Comments Off on Trump Republican Policy Crimes (some only attempted at the moment)
Trump – Republican Positions and Crimes (some just attempted) against the poor, working and middle class Not to be obsessive, but the current Trump Republicans effort to cram their bill to pay back their corporate and rich supporters with giant tax breaks has me frothing a bit. I wrote down --->> read more -->>