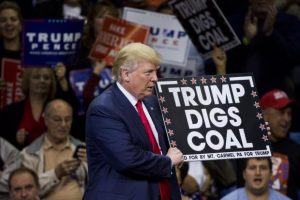 Trump’s recent announcement that he is leaving the Paris Climate Accord and his ongoing gutting of the Environmental Protection Agency should come as no surprise given his billionaire class Cabinet and advisers.  Now it is clear that the Koch brothers have been at work. They are notorious for their Libertarianism, election buying and ownership of huge coal mining corporations.

Today (6/5/2017) on the New Yorker magazine website Jane Mayer wrote in her article, “IN THE WITHDRAWAL FROM THE PARIS CLIMATE AGREEMENT, THE KOCH BROTHERS’ CAMPAIGN BECOMES OVERT” of the now publicly visible campaign by the Koch brothers and many others to make their decade’s long campaign to deny climate change bear new fruit in public policy. More evidence that the plutocrats are now so secure in their control over our politics and the government that they can come out of the shadows and rule directly through Trump. 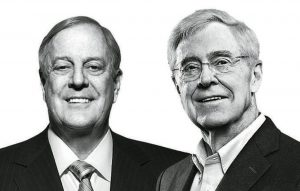 BTW – Jane Mayer spent 5 years investigating big money and particularly the Koch brothers. The resulting book almost reads like a cloak and dagger mystery excepting for the very real people and money at play: DARK MONEY: The Hidden History of the Billionaires Behind the Rise of the Radical Right by Jane Mayer (Doubleday NY 2016) – reviewed in the NYTimes 1/19/2016 by Alan Ehrenhalt.

Park Avenue and How We Got There

January 22, 2017 economy, political system, politics, video-movies-podcasts Comments Off on Park Avenue and How We Got There
“There” is our current situation in which our government has been bought by the rich and corporations, over 80% of the population has not had a pay raise in 40 years and the public sphere, schools, parks, our infrastructure, really anything not behind the gated walls of private wealth, is --->> read more -->>

August 15, 2017 politics, racism Comments Off on Trump, Charlottesville, and Presidential Blinders to White Terrorism
Trump has been widely criticized for his reaction to the white terrorism in Charlottesville last week. “We condemn in the strongest possible terms this egregious display of hatred, bigotry and violence, on many sides. On many sides. It’s been going on for a long time in our country. Not Donald --->> read more -->>

May 13, 2017 justice/jails, politics Comments Off on America’s Longest War and Attorney General Sessions
Attorney General Sessions clearly knows no history, even that of his own lifetime. He is just another petty, cyclical political hack thrust into a prominent position. Nixon’s War on Drugs which Sessions is now re-intensifying began as a cynical campaign tactic. As described by John Erhlichman, Nixon’s domestic policy adviser: --->> read more -->>