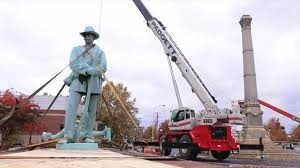 In recent months there has been news of conflict over the removal of three statues of leaders of the Confederacy from public spaces in New Orleans. On Friday 5/19/17 Mayor Mitch Landrieu gave a powerful speech about the need to deny the falsifications of history that are those statues and to embrace the phrase, e pluribus unum, from many we are one. The speech is well worth listening to (it is 23 minutes long):

Though Mayor Landrieu touches on the segregation and oppression of African Americans that persists to this day, he mostly is focusing on the specifics of the removal of these statues honoring the Confederacy. To move us forward we need to confront much more recent racism and deal directly with the structures of segregation and oppression present and persisting today.

The semi-totalitarian system [1]Noted here earlier in my book note: “Slavery by Another Name: The Re-Enslavement of Black People in America from the Civil War to World War II” and for more detail about the rules of life under this system visit Jim Crow Museum of Racist Memorabilia of oppression of African Americans, always referred to by the inexplicable phrase Jim Crow, dominated the life of the South from the 1890s into the 1960s. This was a system of laws and regulations that asserted white dominance reinforced by a social system of daily oppression most ferociously exampled by thousands of lynchings. [2]see Isabel Wilkerson, The Warmth of Other Suns: The Epic Story of America’s Great Migration, 1st ed (New York: Random House, 2010 for a compelling description of life under this system

For another example of persistent racism, segregation in housing and education is as widespread today as ever. We cannot repair this without confronting the role of both Democrats and Republicans through the  Federal, state and local governments in creating the legal structures of segregation. This began chiefly during the 1930s but persisted into the post-WWII middle class housing boom and on into the 1960s. [3]See: Color of Law : A Forgotten History of How Our Government Segregated America by Richard Rothstein, Liveright Publishing Corporation 2017

Even now decades after the passage of the Fair Housing Act in 1968 segregation is supported by real estate developers and real estate sales people. More perniciously segregation is enforced by the attitudes of white people and their choices of neighborhoods. [4]See “Does Race Matter in Neighborhood Preferences? Results from a Video Experiment Maria Krysan, University of Illinois at Chicago Mick P. Couper, University of Michigan Reynolds Farley, and University of Michigan Tyrone Forman Emory University” https://www.ncbi.nlm.nih.gov/pmc/articles/PMC3704191/pdf/nihms482504.pdf accessed 5/26/2017 Segregation in education remains a central fact of American life, yet, unlike housing, which is bricks and mortar and consequently less pliable,  ending segregation in education is just a bus ride away, if white people decide that they want to end it. Other areas of racism could be explored here, income and wealth inequality, inequality in health, a run amuck justice system that disproportionately locks up black and brown people, for example.

October 15, 2019 free-market ideology, racism, recently noted Comments Off on Recently Noted – challenging views of Justice Clarence Thomas – the intractable nature of white racism
Supreme Court Justice Clarence Thomas has been famous and more than a bit of an outlier in American life from the moment he came on the public stage over the summer of 1991. Today I noted an interesting book review by Harvard sociologist Orlando Patterson in the October 4, 2019 --->> read more -->>