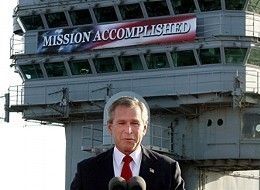 Everyone who wants to know already understands how disastrous President Bush’s Iraq War has been. Hundreds of thousands of lives lost, perhaps several million displaced people and financial costs in the $ trillions. This to depose a dictator not much different than many dictators the US has supported and continues to support elsewhere. After the close of the military phase we undertook the completely idiotic grand administration of the country by Bush’s cronies, most notably Paul Bremer. In his role as the head of the Coalition Provisional Authority, Bremer ruled by fiat. His first two orders were to disband the Ba’ath Party and dismantle the Iraqi Army. In one fell swoop he released a swarm of armed angry men to the countryside. The rest is the rapid decline into violence and chaos and the creation of Iraq as a central rallying point for extremist of all brands. It turns out that exporting American democracy, rule of law and all the other delights of our civilization was not as simple as shock and awe that began the war.

The ensuing history up to this day can only be seen as a catastrophically expensive and destabilizing bit of American overreach for objectives that were never clear excepting the weapons of mass destruction that were never found.

In the context of ceaseless angst and drum beating by politicians and experts over the threat of Iran to us and the rest of the world there is new evidence that the Iraq War has redounded to the benefit of Iran. In the July 15, 2017 NYTimes Tim Arango wrote an article about Iran’s quite comprehensive penetration of Iraqi society and government and the pipeline that exists between Iraq and the fighting in Syria. “Iran Dominates in Iraq After U.S. ‘Handed the Country Over'” appears to be Part 1 so presumably there will be more to follow.

Whither the American Empire?

October 1, 2009 empire 3
Americans do not like to use the word “empire” in reference to the country’s role in the world. Our Presidents uniformly role out rhetoric that sounds just like Obama’s. Here is a paragraph from his Inaugural speech: And so, to all the other peoples and governments who are watching today, --->> read more -->>

Pondering at the Food Coop

November 1, 2008 empire, politics Comments Off on Pondering at the Food Coop
November 1, 2008 So, here I am having coffee and my favorite lunch, a toasted bagel with peanut butter thinking about the approaching election. Finally this will conclude what has been an overly long campaign, but one with enormous pleasures. Assuming that Obama is not just a curiosity to all --->> read more -->>