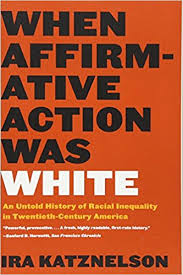 As noted here in “Creating Segregated America in the 20th Century – government in action” segregated America didn’t happen by chance nor by choice of the victims. Consistent white supremacist government action supported by private institutions created the segregation that persists and flourishes in the 21st century. But there is a flip side to this. At the same time government law, regulation and policy created white affirmative programs to provide white people enormous advantages in jobs, education, housing, healthcare and more throughout this period. Columbia University professor Ira Katznelson’s When Affirmative Action Was White: an untold history of racial inequality in twentieth-century America1 lays out the history of Federal legislation, most prominently of the New Deal era, that created the booming white middle-class of the post-WWII decades while excluding African Americans.

In June, 1965 President Johnson gave a commencement speech at Howard  University, “To Fulfill These Rights” about efforts to end segregation and poverty in the African American community. He outlined the growing disparity between white America and black America as follows:

A WIDENING GULF But for the great majority of Negro Americans-the poor, the unemployed, the uprooted, and the dispossessed–there is a much grimmer story. They still, as we meet here tonight, are another nation. Despite the court orders and the laws, despite the legislative victories and the speeches, for them the walls are rising and the gulf is widening.

Here are some of the facts of this American failure.

Thirty-five years ago the rate of unemployment for Negroes and whites was about the same. Tonight the Negro rate is twice as high.

In 1948 the 8 percent unemployment rate for Negro teenage boys was actually less than that of whites. By last year that rate had grown to 23 percent, as against 13 percent for whites unemployed.

Between 1949 and 1959, the income of Negro men relative to white men declined in every section of this country. From 1952 to 1963 the median income of Negro families compared to white actually dropped from 57 percent to 53 percent.

Moreover, the isolation of Negro from white communities is increasing, rather than decreasing as Negroes crowd into the central cities and become a city within a city.

Of course Negro Americans as well as white Americans have shared in our rising national abundance. But the harsh fact of the matter is that in the battle for true equality too many–far too many–are losing ground every day.2

Without exploring the ironies of Johnson, who was present in the Congress and Senate when much of the legislation that generated these disparities was passed with his support, now calling for a solution, this is the central set of facts that persist to this day with only a worsening in some areas in the ensuing five decades following his Great Society programs.

Katznelson recounts the central political facts of the political coalition that passed the New Deal legislation of the 1930s. Northern Democrats had to rely on the support of Southern Democrats for their majorities in both the House and Senate. The Southern Democrats were white supremacists across the board. They could effectively guarantee that every piece of legislation and the regulations that implemented it would exclude African Americans. Any Federal action that might upset the white supremacist regime in the South was foreclosed.3 Second, Southern Democrats also insisted that the administration of programs be handled at the state and local levels of government. This provided further opportunities to exclude or harass African Americans seeking to take advantage of the Federal programs. And third, Southern Democrats made sure that no anti-discrimination policies could be attached to a Federal program.

With the passage of the Social Security Act in 1935 the first national comprehensive economic security program proved not to be so comprehensive and not so national. Southern Democrats forced the final bill to exclude farm workers and maids. This excluded 65% of African Americans nationally and 70 to 80% in the South from the retirement program. To be sure these exclusions in a country that was still quite rural and agricultural also kept 40% of whites outside of Social Security. In the second portion of the bill, Aid for Dependent Children and help for elderly poor, where cost sharing between the Federal and state governments was involved, the impact of local administration was even more decisive in excluding African Americans. Three states, Texas, Kentucky and Mississippi did not participate at all. The third leg of the Social Security Act, unemployment insurance required that an unemployed person’s employer had paid into the system and that they had a history of “regular and stable employment”. Combined with the exclusions for farm workers and maids the availability of this insurance for African Americans was miserable. The net of these affirmative action programs for whites and others is that by 1950 over $100 billion had been transferred to the white population in preference to black America.4

Katznelson details how the same coalition of complicit white Northern Democrats and Southern white-supremacist Democrats crafted labor legislation and the great post-WWII GI Bill to further favor whites. All of these white affirmative action policies contributed to the increasing disparities between white and black America described by president Johnson.

Taken together, the effects of these public laws were devastating. Social Security, from which the majority of blacks were excluded until well into the 1950s, quickly became the country’s most important social legislation. The Labor Laws of the New Deal and Fair Deal created a framework of protection for tens of millions of workers who secured minimum wages, maximum hours, and the right to join industrial as well as craft unions. African Americans, who worked on the land or as domestics, the great majority, lacked these protections. When unions made inroads in the South, where most blacks lived, moreover, Congress changed the rules of the game to make organizing much more difficult. Perhaps most surprising and most important, the treatment of veterans after the war, despite universal eligibility for benefits offered by the GI Bill, perpetuated the blatant racism that had marked military affairs during the war itself.  At no other time in American history have so much money and so many resources been put at the service of the generation completing education, entering the workforce, and forming families. yet comparatively little of this largesse was available to black veterans, With these policies the Gordian knot binding race to class tightened.5

In short African Americans were excluded from the great boom of the 25 years that followed WWII.

This affirmative action for white people and persistent segregation have been the drivers of the continued disparities that mark American society. The ability of African Americans to fully participate and succeed in American life has been and continue to be severely inhibited. Since home ownership is the primary source of wealth accumulation for middle class Americans, we now see a multi-generational gap widening. The persistent segregation with its accompanying poor education, healthcare, lack of job opportunities and mobility, have produced African American incomes and wealth that areis a fraction of what would have been expected to result from the boom decades following WWII. Of course, since the mid 1970s everyone, excepting the top 10 percent, in America has suffered from stagnating incomes and a worsening of wealth accumulation. The fate of African Americans in this environment are predictably somewhat worse.

Katznelson ends his book with an examination of the affirmative action programs following President Johnson’s initiatives. The results have not been very good in terms of changing the fundamentals of income and wealth.

May 1, 2020 books, economy, education, family, healthcare, inequality, justice/jails, politics Comments Off on Tightrope – Americans reaching for hope by Kristof and WuDunn – book review
Kristof and WuDunn’s book, Tightrope – Americans Reaching for Hope, spent some weeks on bestseller lists. Kristof is a well known reporter and writer for the NYTimes. It centers around the town of Yamhill OR and the people that Kristof grew up among. The stories of industrial decline, increasing inequality, --->> read more -->>