Deficits, Deficits – the rhetoric of the forthcoming attacks on the poor

The Republicans have given huge tax breaks to the wealthy and corporations thereby ballooning the deficit by more than $1.5 trillion. Now, they will start making big noises about the need to cut funding for the poor and old to solve our deficit problem. This will be the run up to “reforms” of Medicaid, Medicare, SSI and Food Stamps and infrastructure repairs.

Keep in mind that most of our deficit in the last 15 years has been caused by Bush II’s tax cuts (these also failed to stimulate economic growth) and the wars we have carried on in the name of terror, financed entirely through borrowing.

Though I am not much of a seer, this is the second issue where past history definitely provides some guidance. Back in June 2017 I wrote about the use of Trickle Down Economics to justify Republican hand outs to the wealthy and corporations. See: “Trickle-Down Returns to Enrich the Rich“. With the same assurance you can look forward to a blast of Republican talk about how “entitlements” to the poor are bankrupting the nation – never mention the tax cuts and loop holes for the wealthy and corporations. 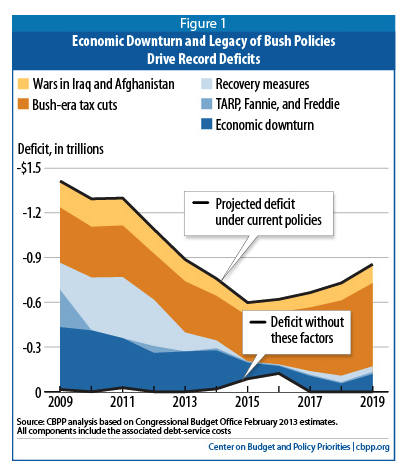 Where, Oh, Where Did Our National Debt Come From?

July 8, 2011 economy, politics Comments Off on Where, Oh, Where Did Our National Debt Come From?
The political rhetoric of the current moment, chiefly flowing from Republicans, but barely challenged by the Democrats, describes tales of profligate over-spending by the Federal government matched with burdensome taxation. While it is true that Federal spending is higher proportionately than post-WWII norms, social programs are not the source of this --->> read more -->>

April 2, 2011 economy, politics Comments Off on Let’s Talk About The Defense Budget – a letter to the editor
(This was submitted to the Letters to the Editor section of the Register Star here in Hudson. Not clear at the moment whether it will be published.) Discussions of the Federal budget almost never mention the defense department.  Both political parties continue in the thrall of what President Eisenhower called the “military-industrial complex”. --->> read more -->>