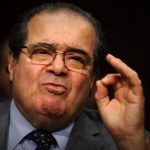 Fire arms proponents make much of the  2008 case District of Columbia v. Heller in which the Supreme Court absolutely affirmed the right to bear arms as a constitutionally guaranteed right. Lost in this rhetoric is the fact that no rights are absolute. All are subject to constraints. For example, the First Amendment does not give a person the right to shout “Fire” in a movie theatre or concert hall.

Justice Scalia’s majority opinion resolutely and clearly points this out:

”Like most rights, the right secured by the Second Amendment is not unlimited. From Blackstone through the 19th-century cases, commentators and courts routinely explained that the right was not a right to keep and carry any weapon whatsoever in any manner whatsoever and for whatever purpose[note}(the original document’s inline notes have been removed here[/note]…For example, the majority of the 19th-century courts to consider the question held that prohibitions on carrying concealed weapons were lawful under the Second Amendment or state analogues….. Although we do not undertake an exhaustive historical analysis today of the full scope of the Second Amendment, nothing in our opinion should be taken to cast doubt on longstanding prohibitions on the possession of firearms by felons and the mentally ill, or laws forbidding the carrying of firearms in sensitive places such as schools and government buildings, or laws imposing conditions and qualifications on the commercial sale of arms.

We also recognize another important limitation on the right to keep and carry arms. Miller said, as we have explained, that the sorts of weapons protected were those “in common use at the time….. We think that limitation is fairly supported by the historical tradition of prohibiting the carrying of “dangerous and unusual weapons.”

So, we need to push back against the NRA and all of its craven political supporters in local, state and Federal governments clear in the knowledge that firearms are subject to control and limitations. Justice Scalia, a famed supporter and user of guns said so.