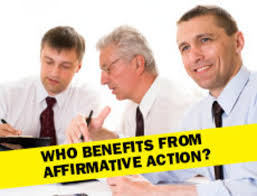 In recent years scholars and activists have begun to point out how white privilege is supported by many decades of government action that affirmatively transfers money and resources to whites while explicitly denying the same support to African-Americans.1 To my knowledge Martin Luther King never used the phrase “white affirmative action”, but in his March 31, 1968 speech at the National Cathedral in Washington, DC, “Remaining Awake Through a Great Revolution”2 he outlined, in his well know cadence and rhetoric3, exactly the foundation of what in recent years we have begun to be called white affirmative action.

Here is an excerpt from his speech:

In 1863 the Negro was told that he was free as a result of the Emancipation Proclamation being signed by Abraham Lincoln. But he was not given any land to make that freedom meaningful. It was something like keeping a person in prison for a number of years and suddenly discovering that that person is not guilty of the crime for which he was convicted. And you just go up to him and say, “Now you are free,” but you don’t give him any bus fare to get to town. You don’t give him any money to get some clothes to put on his back or to get on his feet again in life.

Every court of jurisprudence would rise up against this, and yet this is the very thing that our nation did to the black man. It simply said, “You’re free,” and it left him there penniless, illiterate, not knowing what to do. And the irony of it all is that at the same time the nation failed to do anything for the black man, though an act of Congress was giving away millions of acres of land in the West and the Midwest. Which meant that it was willing to undergird its white peasants from Europe with an economic floor.

But not only did it give the land, it built land-grant colleges to teach them how to farm. Not only that, it provided county agents to further their expertise in farming; not only that, as the years unfolded it provided low interest rates so that they could mechanize their farms. And to this day thousands of these very persons are receiving millions of dollars in federal subsidies every years not to farm. And these are so often the very people who tell Negroes that they must lift themselves by their own bootstraps. It’s all right to tell a man to lift himself by his own bootstraps, but it is a cruel jest to say to a bootless man that he ought to lift himself by his own bootstraps.

We must come to see that the roots of racism are very deep in our country, and there must be something positive and massive done in order to get rid of all the effects of racism and the tragedies of racial injustice.

September 19, 2017 Delusion Comments Off on Introduction to American Delusions
This website casts new light on the delusions of American life. It provides facts and analysis to critique thinking that serves to shield activities of those seeking to gain advantage over others. To get started read Delusions of American Life first. Then, see the keystone essay, “What Is Capitalism and --->> read more -->>

June 7, 2020 economy, education, inequality, justice/jails, racism, recently noted, video-movies-podcasts Comments Off on “How Structural Racism Works” – Tricia Rose and Samuel Rosen – recently noted
If you are struggling to get your head around how racism works you will probably find it helpful to have a general framework as a guide. This one hour lecture from 2017 features an overview by Brown University Professor Tricia Rose of the structure of racism and how it works --->> read more -->>