The recent controversies surrounding Joe Biden’s anti- school busing collaborations with racist politicians from the south has for the moment aroused new comment on segregated America. The New York Times published an excellent review of the history of school desegregation by Nikole Hannah-Jones, “It Was Never About Busing: Court-ordered desegregation worked. But white racism made it hard to accept.” As the article notes the yellow school bus has been in use for almost a hundred years. White children have been bused to schools for decades to good results. But when used to desegregate schools they became a convenient symbol for white supremacists. Politicians and locals alike jumped on this innovation in racist political rhetoric.

Here are a couple of charts from the article. Note that the liberal Northeast has been the most vigorous and successful in resegregation. 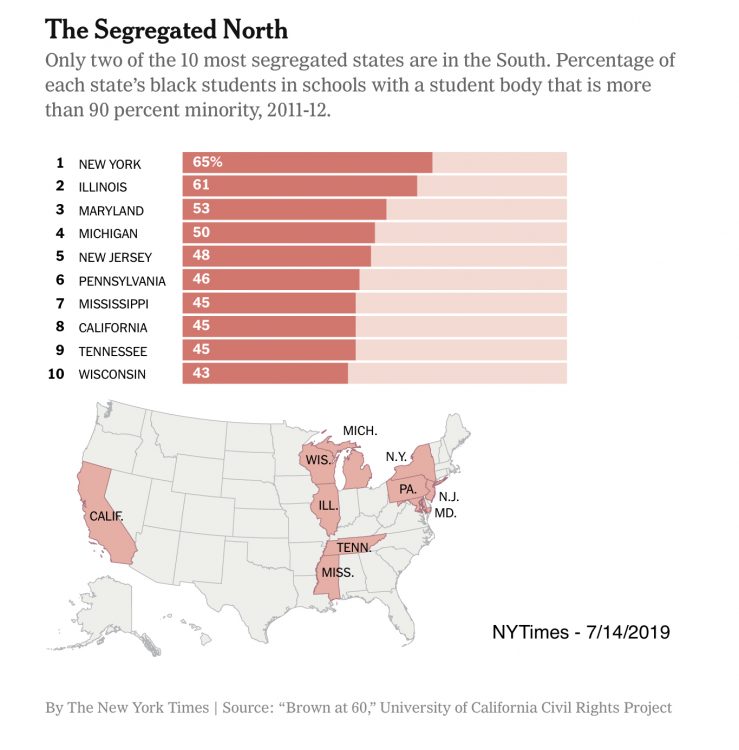 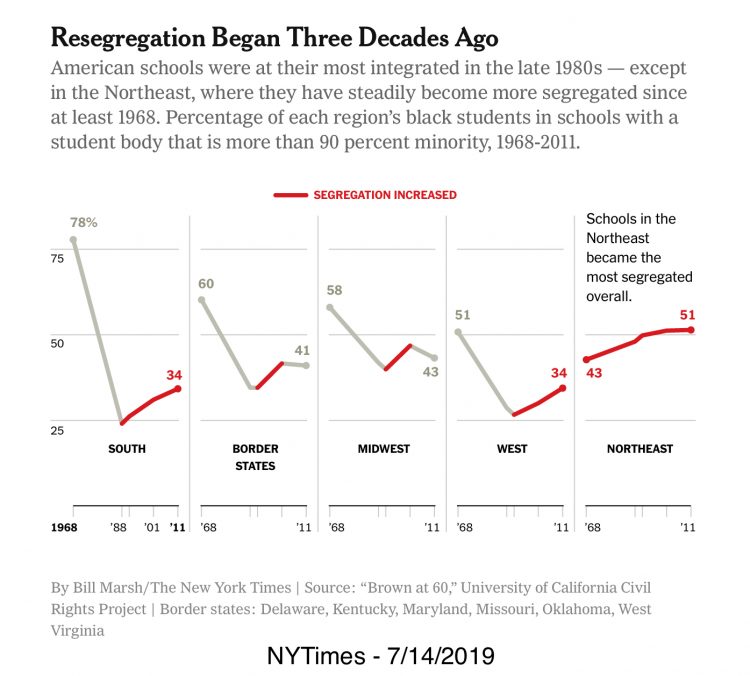 Hannah-Jones does mention that school segregation is just one of many government led and sanctioned practices that have created and maintained America as a very segregated place. We have noted this in earlier posts:

May 12, 2017 recently noted Comments Off on Recently Noted – about racism
from the New York Times: How Homeownership Became the Engine of American Inequality An enormous entitlement in the tax code props up home prices — and overwhelmingly benefits the wealthy and the upper middle class. By MATTHEW DESMOND MAY 9, 2017 Read the article >>>>>>

August 2, 2017 racism, recently noted Comments Off on Recently Noted – about racism
The New York Times reported today (8/2/2017) that the Trump regime has decided to “redirect resources of the Justice Department’s civil rights division toward investigating and suing universities over affirmative action admissions policies deemed to discriminate against white applicants,….” (see link below for the full article) NPR and others are --->> read more -->>

October 15, 2019 free-market ideology, racism, recently noted Comments Off on Recently Noted – challenging views of Justice Clarence Thomas – the intractable nature of white racism
Supreme Court Justice Clarence Thomas has been famous and more than a bit of an outlier in American life from the moment he came on the public stage over the summer of 1991. Today I noted an interesting book review by Harvard sociologist Orlando Patterson in the October 4, 2019 --->> read more -->>