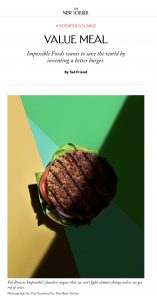 The New Yorker published “Value Meal: Impossible Foods wants to save the world by inventing a better burger” by Tad Friend in the 9/30/2019 issue. During the introductory paragraphs the following statistic was cited:

Every four pounds of beef you eat contributes to as much global warming as flying from New York to London—and the average American eats that much each month.

Now one might rush to think that this is either a misstatement or hyperbole until you recall the long-established and highly respected fact checking that New Yorker articles under go. So think again, soon, about how you can take your own personal steps to help in fighting global warming and the degradation of the earth caused by our enormous global animal meat production system.

June 5, 2017 environment, political system, politics Comments Off on The Environment, Trump, Koch Brothers & Big Money
Trump’s recent announcement that he is leaving the Paris Climate Accord and his ongoing gutting of the Environmental Protection Agency should come as no surprise given his billionaire class Cabinet and advisers.  Now it is clear that the Koch brothers have been at work. They are notorious for their Libertarianism, --->> read more -->>

March 4, 2017 environment, free-market ideology, video-movies-podcasts Comments Off on BEHEMOTH (BEI XI MO SHOU) at TSL Hudson
This 2015 movie by Chinese director Liang Zhao is filled with great cinematography and sounds. It trades back and forth between scenes of enormous horizon gulping coal mines, under ground mines, iron making, and ends with scenes of a ghost city filled with enormous apartment blocks in a newly developed --->> read more -->>