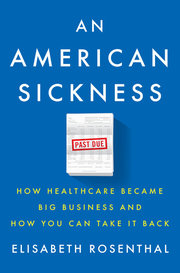 Jacob S. Hacker, Yale professor and author of many books and article critiquing the American political system, economy, and the fate of the poor and middle classes, reviewed a new book, AN AMERICAN SICKNESS: How Healthcare Became Big Business and How You Can Take It Back by Elisabeth Rosenthal (NY: Penguin Press, 2017). Most of the review takes up the question of why healthcare is not like other commodities and does not fit into the “let the market solve the problem” ideology of the last 40 years. If you are unpersuaded now, this is useful territory. Towards the end of the review Hacker turns to our developed country competitors’ approaches to healthcare.

“The difference between the United States and other countries isn’t the role of insurance; it’s the role of government. More specifically, it’s the way in which those who benefit from America’s dysfunctional market have mobilized to use government to protect their earnings and profits. ….. But in every other rich country, the government not only provides coverage to all citizens; it also provides strong counterpressure to those who seek to use their inherent market power to raise prices or deliver lucrative but unnecessary services — typically in the form of hard limits on how much health care providers can charge.”

This is a great summary statement. Using a variety of tools and institutional arrangements every other government controls prices and healthcare budgets. They do not allow a one-sided market to focus on delivering as many procedures and prescriptions as possible without any systematic focus on health. My criticism is that Hacker should have provided two further data points to put the outrage of American healthcare in its true global setting: US healthcare spending compared to other developed countries and health outcomes relative to other developed countries. As the chart below demonstrates, the US spends more than 25% more than our closest competitor, Switzerland, and twice as much as most including japan, France, Australia and Canada. The health outcomes are woeful. We rank 42 in the world for longevity and 56th for infant mortality.  [1]see https://www.cia.gov/library/publications/resources/the-world-factbook/ These facts need to be front and center in our thinking about healthcare. The developed world is filled with universal healthcare systems with many different structures and approaches, all with several decades of experience at delivering better healthcare at much less expense. The only question is how will poor and middle class people in the united states gain enough political power to end this great rip-off??

June 24, 2017 healthcare Comments Off on The Democratic Party and Healthcare – Preserving Obamacare Cannot Be The End Game
While our current attention is on the Republican Party’s transfer of wealth to the rich and corporations through the charade of a healthcare reform, the Democratic Party needs to face up to its future and the future of our healthcare system in particular. The Global Context The chart shown here --->> read more -->>

June 21, 2017 healthcare, recently noted Comments Off on Recently Noted – about healthcare
from the New York Times an article that covers some earlier history of the US healthcare industry. How Did Health Care Get to Be Such a Mess? By CHRISTY FORD CHAPIN “The problem with American health care is not the care. It’s the insurance. Both parties have stumbled to enact comprehensive health --->> read more -->>