Trump has been widely criticized for his reaction to the white terrorism in Charlottesville last week. 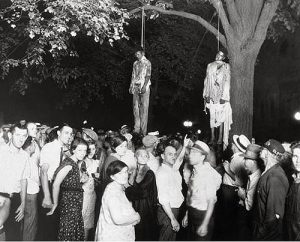 Viewed from a bit longer lens of history this reaction to white supremacist terrorism fits in very well with the lengthy history of Presidents, Congress, and the judicial branch turning a blind eye to white terrorism used as a tool to oppress African Americans during the so-called Jim Crowe era.

In a new report from the Equal Justice Initiative about lynchings:

In an expanded edition of Lynching in America, EJI documents racial terrorism beyond Southern borders, detailing more than 300 lynchings of black people in eight states with high lynching rates in the Midwest and the Upper South, including Oklahoma (76 lynchings), Missouri (60), Illinois (56), West Virginia (35), Maryland (28), Kansas (19), Indiana (18), and Ohio (15).

“Racial terror lynching was a national problem. Hundreds of lynchings took place outside the American South, and millions of people fled to the North, Midwest, and West seeking shelter from the terror,” said EJI Director Bryan Stevenson. 1

FDR, for example, kept silent about this and all of the other violence by state and private actors used to enforce the totalitarian system of segregation because he needed the support of racist Southern Democrats to move his New Deal legislation through Congress. As noted here earlier 2  this led to African Americans and others of color being essentially excluded from the flow of government money through social security, unions, housing, and education policies.

Trump undoubtedly knows nothing of this history. But when he wrote in his tweet, “It’s been going on for a long time in our country.” We should reflect back on the actual history and understand that he is just following in a long tradition of white politicians using the support of white racists to support their ends.

Creating Segregated America in the 20th Century – Government in Action

August 7, 2020 healthcare, politics, Video Posts Comments Off on Video Post – Trump’s Pandemic
Trump and his Republican enablers – the Trumplicans –  are responsible for the pandemic in the US and the nearly 200k deaths that have occurred to date. Comparing the US response with the rest of the world makes it clear that this catastrophe is the direct result of Trumplican policies. --->> read more -->>

August 2, 2017 racism, recently noted Comments Off on Recently Noted – about racism
The New York Times reported today (8/2/2017) that the Trump regime has decided to “redirect resources of the Justice Department’s civil rights division toward investigating and suing universities over affirmative action admissions policies deemed to discriminate against white applicants,….” (see link below for the full article) NPR and others are --->> read more -->>