The 1/10/18 NYTimes article, Where Did Your Pay Raise Go? It May Have Become a Bonus by Patricia Cohen takes note of the long term trend of corporations awarding employees bonuses instead of pay raises. Here is the story in one chart: 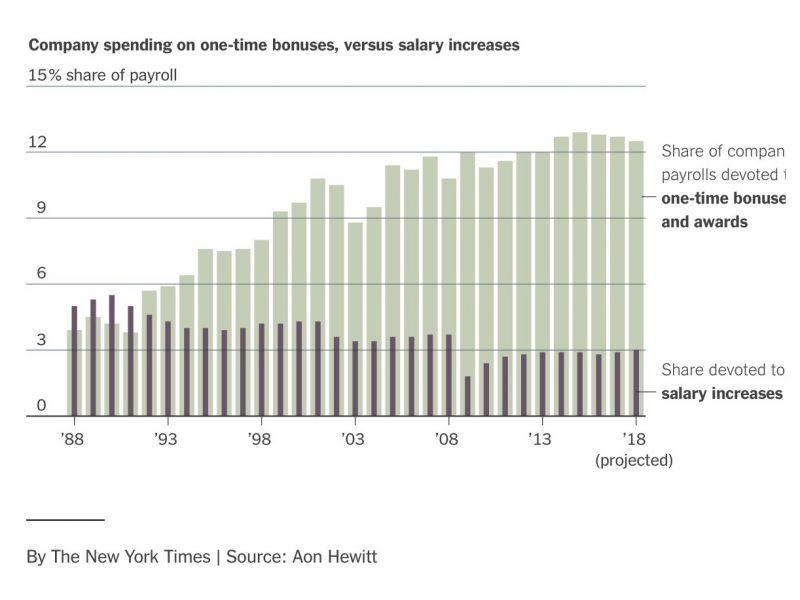 The NYTimes explains this phenomenon based on corporations reacting to the challenges of the last recessions and the need for greater flexibility, the catch all excuse for almost every corporate action that increases their power vis-a-vis their employees1 No surprise the article reports:

If given a choice, most workers would take a raise. When Aon Hewitt asked 2,079 American workers in a second, newly completed survey what they would like to see their employers do with their tax-cut windfall, 65 percent chose a pay raise — twice as many as any other option, including a bonus or a 401(k) contribution.

Takisha Gower, a passenger service agent for Envoy, the air carrier that was previously known as American Eagle and is owned by American Airlines, welcomed her recent $1,000 bonus, which the company credited to the “new tax structure.” She is much more concerned, however, about her base pay week to week, a subject of longstanding contract negotiations.

“It was appreciated, but it doesn’t fix the long term,” Ms. Gower said of the bonus. “We need a livable wage that we can support our families off.”

“A lot of employees qualify for government assistance,” she added. “Some have to work 60 hours a week to make ends meet.”

The fact of the matter is that corporations have not and will not share the long-term productivity gains experienced in the economy except in the most grudging and self-serving manner. 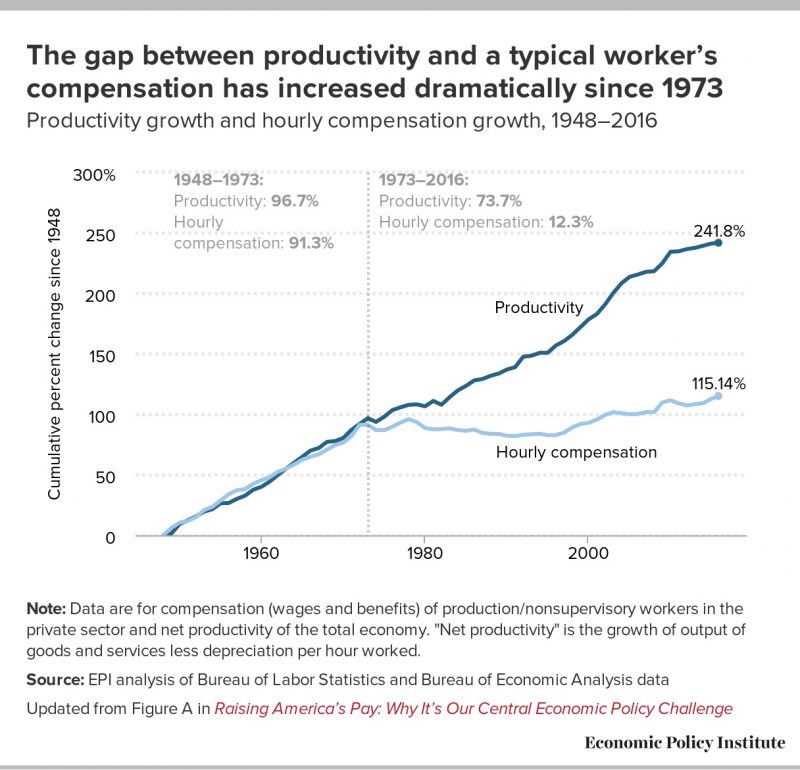 Mysteriously the article does not point out the connection between the collapse of unions in the private sector and the stagnation of wages and salaries. An individual has virtually no bargaining power with corporations. They can and will pay as little as possible because they can. The individual is in a take it or leave it bargaining position. Unions long provided the leverage to drive better wage and workplace condition bargains exactly because corporations did have to bargain. And, there is evidence to show that union led wage scales buoyed those for the non-unionized worker. Here is a chart showing the rate of unionization since WWII: One might note that the very same early 1970s that marks the beginning of our more than four decades of real income stagnation and even decline for some sectors of the working and middle classes lines up with the decline in unionization.

June 24, 2017 healthcare Comments Off on The Democratic Party and Healthcare – Preserving Obamacare Cannot Be The End Game
While our current attention is on the Republican Party’s transfer of wealth to the rich and corporations through the charade of a healthcare reform, the Democratic Party needs to face up to its future and the future of our healthcare system in particular. The Global Context The chart shown here --->> read more -->>

November 19, 2011 economy, free-market ideology, politics Comments Off on Charts from Mother Jones Illustrate That the Rich Have Won the Class War
I came on a set of graphics in Mother Jones, “It’s the Inequality, Stupid: Eleven charts that explain what’s wrong with America” that illustrate what you probably already know. But, a simple refresher course in some of the reasons why the rich are rich. The 99% already have this base covered. Here are some of the --->> read more -->>