The Russian war against Ukraine has produced a lot of noise about the fate of Russian oligarchs. Seizures of the yachts, bank accounts and more. Perhaps we should spend a bit of energy focusing on our own oligarchs, the rich and corporations. Despite all of the noise of the Republican Party’s decline towards homophobic racist autocracy and the occasional shouts from the left wing of the Democratic Party, our oligarchs maintain their control over the government at both the Federal and state levels.

A new report from OpenSecrets.org shows that lobbying is alive and flourishing in Washington. 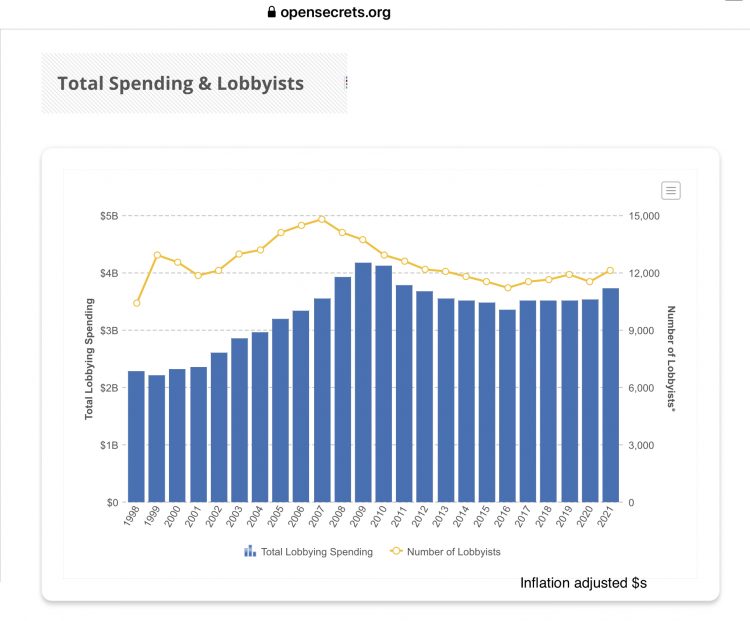 So for each of the 535 members of Congress (House and Senate) there are 22 lobbyists bending their ears spending $13.8 million. That’s a grand total of 12,136 lobbyists spending $3.78 billion. Add on the waves of money, much of it hidden behind the anonymity allowed under our campaign finance laws, spent on political campaigns and it is not hard to see that our oligarch’s actually own our political processes and government. “We the People, and the Republic we must reclaim” the TEDx talk by Lawrence Lessig from 2013 is still a great introduction to how our electoral politics works. Then spend a few more minutes listening to the podcast from This American Life “Take the Money and Run for Office“. This details the innumerable hours spent by our so-called representatives in Washington dialing for dollars from the rich and corporations.

For confirmation look to the empirical research by Gilens and Page.1 From their summary statement, “…economic elites and organized groups representing business interests have substantial independent impacts on U.S. government policy, while average citizens and mass-based interest groups have little or no independent influence.”

June 17, 2013 security state Comments Off on NSA Vacuuming, Meta Data, Mistaken Misleading Metaphors
NSA’s gathering of Meta Data Compared to Corporate Use of Information In the current discussions of the government’s wholesale seizure of the meta data of our personal digital lives there is regular comparison to the acquisition and use of information about our digital lives by corporations. At the moment corporate --->> read more -->>

Diversity and Identity Politics Is A Deadend

March 1, 2017 politics Comments Off on Diversity and Identity Politics Is A Deadend
Progressives have to declare class war as a central strategy. Otherwise we will all be sitting at the dinner table basking in our glorious diversity with nothing to eat. For many good reasons identity and diversity have dominated our politics for decades.  Progressives celebrate its expansion and Republicans and their --->> read more -->>

Please navigate to Appearance → Widgets in your WordPress dashboard and add some widgets into the Sidebar widget area.