The Watson Institute at Brown University has just released an updated report: United States Budgetary Costs of Post 9/11 Wars Through FY2018: A Summary of the $5.6 Trillion in Costs for the US Wars in Iraq, Syria, Afghanistan and Pakistan, and Post 9/11 Veterans Care and Homeland Security by Neta C. Crawford. This report includes many war costs that the official Pentagon figure of $1.52 trillion leaves out.1

Neither of these estimates includes the interest charges accruing because all of this spending was done through borrowing money. Interest charges through 2056 are estimated to be an additional $7.9 trillion. 2 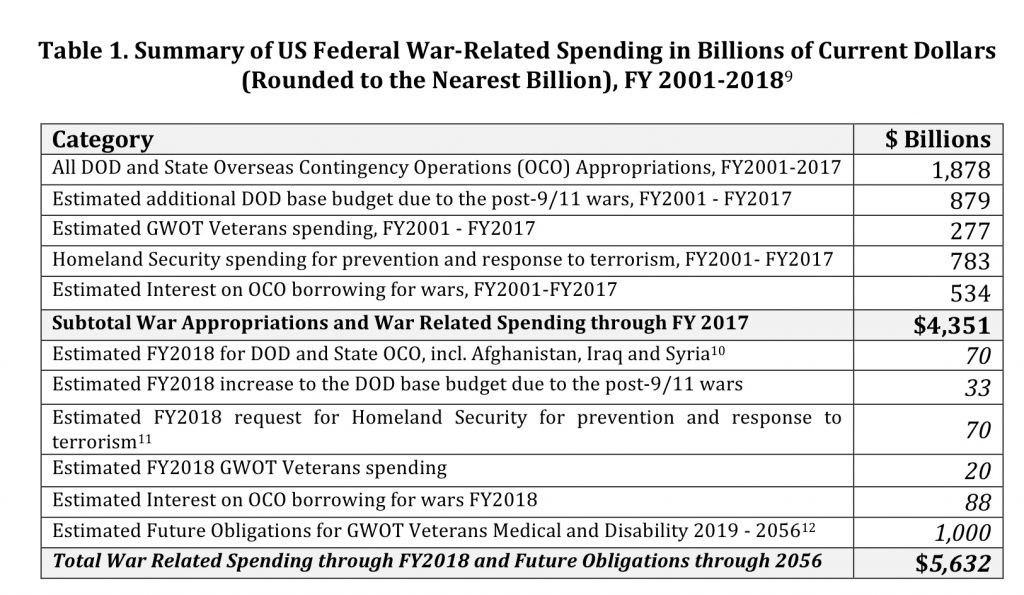 What Other Costs Are Not Included Here?

The Watson Institute report goes on at some length about costs  not included in their analysis. But, beyond those, we need to consider what economists would call the external costs, the costs paid by someone else. For instance, Iraqi civilian deaths resulting from Operation Iraqi Freedom (that is Bush II’s name for this war) are estimated at between 151,000 and 655,0003 Then there are the people who fled the war and chaos.The UN High Commission on Refugees reports 3,231,210 people displaced within Iraq and 1,626,558 displaced outside of Iraq.4 This in a country with a total population of 37.2 million. Beyond these numbers consider the losses of education and healthcare disrupted, lost economic production, environmental damage from the war.

What Have We Gotten for 16 Years of War?

Then, consider that Operation Iraqi Freedom turned Iraq into a major training ground and exporter of militant fighters. With the collapse of Iraq, Iran has been able to expand its operations throughout the region contributing to further destabilization. No one can argue that the US has been made safer or more secure by this war. Afghanistan continues to be a narco-state with rampant corruption propped up by the US. Pakistan is a troubled as ever with endemic warfare in its border regions. See an earlier article: “Delusions of Empire – Iran in Iraq 15 Years After Bush’s War”

$5.6 trillion is a big number. What might we have spent this money on that would be helpful to us while not creating the havoc our wars have caused? The American Society of Civil Engineers estimates that we need $4.4 trillion over the next ten years to bring our infrastructure up to snuff. 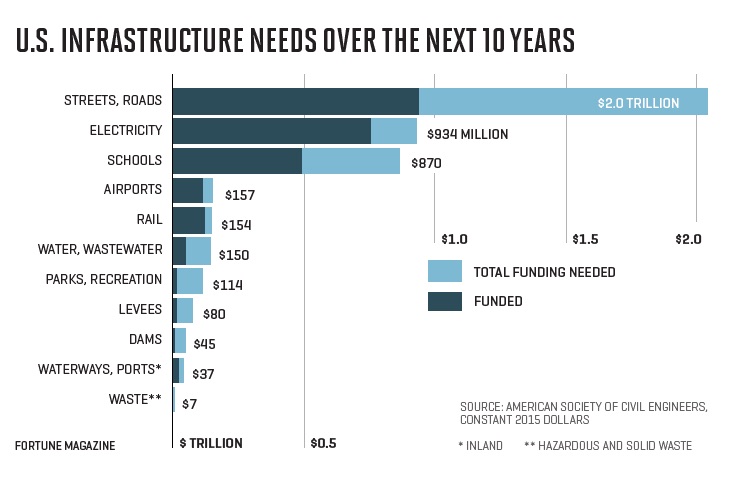 September 19, 2017 Delusion Comments Off on Introduction to American Delusions
This website casts new light on the delusions of American life. It provides facts and analysis to critique thinking that serves to shield activities of those seeking to gain advantage over others. To get started read Delusions of American Life first. Then, see the keystone essay, “What Is Capitalism and --->> read more -->>

Russian “Interference” and the American Empire – the lost ironies

November 5, 2017 empire Comments Off on Russian “Interference” and the American Empire – the lost ironies
With all of the current outrage over Russia’s attempts to influence our last presidential election one can only be struck by the notion that Americans don’t know their own history, even that which occurred within our own lifetimes. Thus they are unable to see the ironies involved in our complaints --->> read more -->>

July 18, 2017 empire Comments Off on Delusions of Empire – Iran in Iraq 15 Years After Bush’s War
Everyone who wants to know already understands how disastrous President Bush’s Iraq War has been. Hundreds of thousands of lives lost, perhaps several million displaced people and financial costs in the $ trillions. This to depose a dictator not much different than many dictators the US has supported and continues --->> read more -->>