There has been focus on wealth and income inequality for years. It is a pressing problem for more than 80% of the US population. But there is an other inequality, political inequality, that is at the heart of the more talked about inequality. In 2013 Harvard Professor Lawrence Lessig provided us with a delightful introduction to how political inequality works – We the People, and the Republic we must reclaim (length 18’14”) in which he introduced us to Lester Land where 144,000 people control who gets 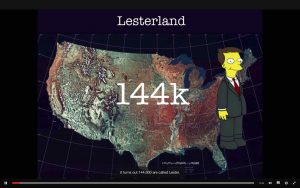 nominated for public office, the initial step in wealth and income inequality. I wrote an earlier piece based in part on this Lessig talk, The Corruption at the Center of American Politics and Government.

Lessig returned in 2015 with another TED Talk, – Our democracy no longer represents the people. Here’s how we fix it (length: 20′ 53″) – in which he continues his clever, even entertaining, exploration of how the rich and corporations control our politics through total domination of the money in politics that controls who gets nominated for office. After pointing to how Beijing controls politics in Hong Kong through a closed nominating system that assures that Hong Kong elections can only produce a government favorable to Beijing, Lessig introduces us to a famous 19th century New York City political boss, William M. Tweed.  “I don’t care who does the electing, as long as I get to do the nominating.” In the American political system the rich and corporations hold a private primary of money before we even get to the starting line for attaining political office. Only those who meet the requirements of the rich and corporations will receive the money needed to launch a campaign. 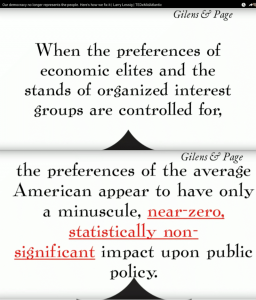 The ultimate outcome of this system of control is demonstrated by the findings of 2014 research report Testing Theories of American Politics: Elites, Interest Groups, and Average Citizens by Martin Gilens and Benjamin I. Page 1. Here are Lessig’s summary slides concerning the findings.

In short if you are not in the 400 families who provide half of all political funding you cannot get to the starting gate. The results of Gilens-Page analysis of Federal legislation over the past 40 years shows that the economic elite in fact gets their way frequently and usually to their benefit. The recent Republican tax cuts for the rich and corporations are an example.

The Shape of This Political Inequality

This money primary advantage is supported and expanded by other policies of political inequality. Election laws make it difficult to vote. Troubles with registering to vote, ID requirements, voting days held during the work week, long lines to vote, and more. And, no surprise these difficulties rest most heavily on black and brown voters. Both the Republican and Democratic Parties act to maintain their connection to the flow of big money and their monopoly of who gets to run for office. The barriers to third parties are not a lack of alternative ideas but a voting system that penalizes voters for choosing any candidate but a Democrat or Republican, the wasted vote problem.

The Future of the Women’s March

January 24, 2017 politics Comments Off on The Future of the Women’s March
There is much ongoing discussion about steps needed to turn the enormous one day action of the global Women’s March in to a sustained movement to achieve better outcomes for the vast majority of Americans. To focus on just one strategic element, the movement needs to move beyond identity politics --->> read more -->>